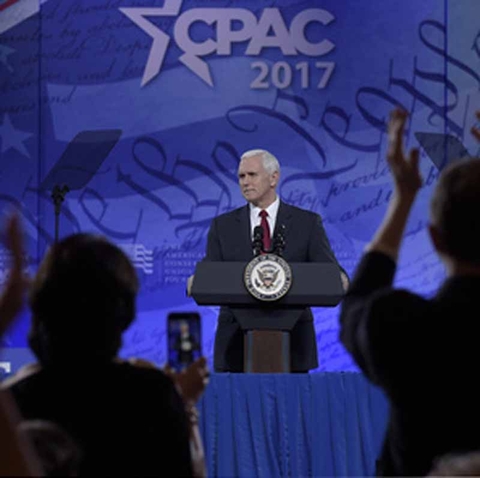 Speaking at the Conservative Political Action Conference, Vice President Mike Pence said Trump's victory provided the nation with what could be a once-in-a-lifetime opportunity to install conservative solutions to the nation's problems.

"This is the chance we've worked so hard, for so long, to see. This is the time to prove again that our answers are the right answers for America," Pence said.

The vice president said the Trump administration would soon take aim at the sweeping health care law approved under former President Barack Obama, saying the nation's "Obamacare nightmare is about to end." He said Republicans would implement a new plan and would have "an orderly transition to a better health care system."

Earlier, White House chief of staff Reince Priebus pleased for patience and unity, urging activists not to squander the Republican Party's control of both chambers of Congress and the White House.  Trump adviser Steve Bannon made his case for a governing strategy based on aggressive deregulation and an "economic nationalism" in negotiating new free trade deals.

"What you've got is an incredible opportunity to use this victory," Priebus said. Some of Trump's plans for creating jobs and putting more money in people's pockets will take time, he said. "We've got to stick together and make sure we have President Trump for eight years."

Priebus' pleas acknowledged conservatives' underlying skepticism about the new president, a former Democrat who in the past has elicited boos at the conference. Trump has often suggested he doesn't prioritize the social issues many conservatives elevate, and his proposal for a massive infrastructure bill has cast doubts about his commitment to curb government spending.

But with a Republican in the White House for the first time in eight years, many activists say they feel energized and more than willing to give him a chance.

The decades-old CPAC, as the event is known, is now really more like "TPAC," White House counselor Kellyanne Conway said.

She and other Trump administration speakers thanked conservatives for voting for Trump last fall. Bannon said appreciation would largely be the theme of the president's remarks Friday to the group.

Many in the audience chanted "Trump! Trump! Trump!" as Bannon, a provocateur and outsider, and Priebus, a GOP party insider, made a joint appearance onstage. The duo's chummy joint interview seemed designed to refute media reports that the two are working at cross-purposes in a factionalized White House.

Priebus presented their partnership as evidence that conservatives and Trump supporters can work together.

In his remarks, Bannon emphasized Trump's plans to deregulate businesses — or what he described as "deconstruction of the administrative state."

"Every business leader we've had in is saying not just taxes, but it is also the regulation. I think the consistent, if you look at these Cabinet appointees, they were selected for a reason and that is the deconstruction," he said.

Education Secretary Betsy DeVos urged the activists to "engage" and "be loud" in the face of politicians who stand in the way of changing the education system.

"We have a unique window of opportunity to make school choice a reality" for millions for families, she said.

"As governors, as activists, engaged citizens, we need to hold all elected leaders accountable for results in this cycle right now. We may not get this same opportunity again. We can't squander it."

Although Republicans have long vowed to overturn Obama's health care law, the election of Trump and majorities in Congress now have a chance to do it.

"Fellow conservatives, this is our time," he said. "We must and we can repeal Obamacare now."