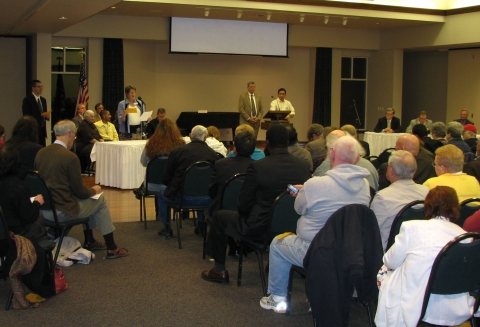 Last month, a group of citizens concerned about further increases in utility rates meet with leaders of OG&E, the Oklahoma Attorney General’s office and a spokesperson for AARP.

At a time when the unemployment rate is highest since the Great Depression of the 1930’s and Oklahoma families have suffered through a summer of the highest electric bills of all time, a large number of Oklahoma citizens are angry that OG&E is now proposing a $73 million rate increase. This increase would add an additional $6.50 per residential customer per month.

Last month, a group of concerned citizens, headed by the Oklahoma Sponsoring Committee (OSC), held a forum regarding the proposed rate hike. Attended by a large number of concerned citizens and members of the OSC, others attending included Donald Rowlett, OG&E’s director of regulatory policy and compliance; Brian Alford, corporate communications director for OG&E; Deborah Thompson, an attorney representing AARP in petition against the OG&E rate hike; and Bill Hume, an attorney from the attorney general’s office.

Despite record earnings in 2010, OG&E’s representatives said the proposed rate hike is necessary to recover costs of improvements made over the last two and a half years. This rate hike proposal comes after a $20 million reduction by OG&E of pensions and benefits for its employees in 2011.

“As a stockholder, I am thrilled by OG&E’s performance.” Melodie Garneau, a leader with Mayflower UCC, said. “However, I am concerned that OG&E has failed to recognize the tight economy we are in at the expense of rate payers.”

She and other leaders point to:

On Tuesday December 13, 2011 from 9:30 am-12:30 pm the Oklahoma Corporation Commission will begin hearing testimony regarding the proposed rate hike at the Commission office in the Jim Thorpe building on the grounds of the State Capitol. Two citizens groups, OSC (www.oksponsoring.org) and a group called “Occupy OG&E,” will be in attendance to oppose the rate hikes and support the rate decrease. All citizens are encouraged to show up and support the cause.