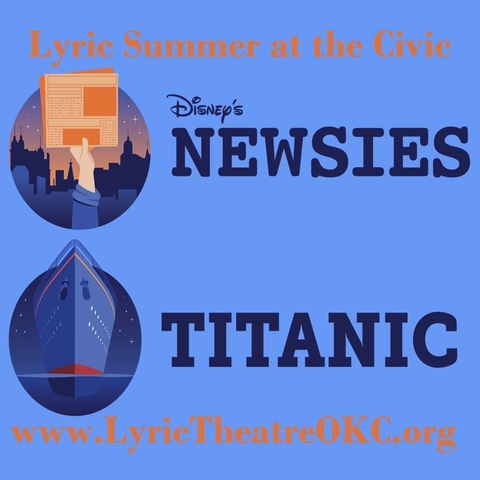 After the smashing success of the first Lyric Summer at the Civic production, Singin’ In The Rain, we continue our transatlantic voyage to continue with two more, all-new, large-scale, fully-orchestrated productions at the Civic Center Music Hall, 201 N Walker Ave., continuing with Disney’s Newsies (July 9-14) and concluding with Titanic (July 23-28).

Lyric delivers Disney’s Newsies, which is sure to “Seize the Day.” Incredible dancing and rousing anthems raise the roof in this thrilling story of the New York City newsboy strike of 1899.

A spirited crew of rag-tag orphans wins the hearts of a nation in this unforgettable Disney musical. When publisher Joseph Pulitzer raises the price of what he charges the newsies to sell his “papes,” the street kids are faced with the prospect of being unable to feed themselves or their families (if they have them) and hastily form a union and strike.

“This high-energy production is filled with incredible dancing that will leave many of our patrons inspired to jump in and help ‘carry the banner’ with these newsboys,” said Ashley Wells, Lyric’s Associate Artistic Director, who is directing this production.

“You can’t help but empathize with the newsboys who were primarily the sons and daughters of immigrants. They became newsies because they had to help their families survive the oppression and disadvantages of being poor in turn-of-the-century New York City.”

And be sure to make your reservations for The Gayly’s Pride Night at Newsies Friday, July 12, at 7:30 pm. You’ll enjoy an exclusive backstage tour and meet some of the actors. ­­

Lyric’s Summer at the Civic culminates with Titanic, which features a cast of more than 40 and a choir of more than 75 voices. The engineering feat of 1912 takes center stage in this Tony Award-winning Best Musical. Based on real people aboard the legendary ship, Titanic is a stunning and stirring production of the hopes and dreams of her passengers, who each boarded with stories and personal ambitions of their own, all innocently unaware of the fate awaiting them.

By researching eyewitness accounts, diaries, and actual photographs, Lyric's creative team will bring to life the real people who sailed on the Titanic, from the crew to the first-, second- and third-class passengers. Wearing costumes that recreate the actual clothes worn by those on board, Lyric's cast will embody the excitement, hope, and risks of this legendary transatlantic voyage.

“The Broadway musical Titanic is as epic and grand as live theatre can be,” said Baron, who is directing the production. “Not since Lyric's 2014 production of Les Misérables have we produced a musical this huge. I'm looking forward to directing a cast of 42, a chorus of 75 – featuring Canterbury Voices – and an orchestra of 22 led by OKC Philharmonic's Alexander Mickelthwate. Titanic continues to captivate the world since that fateful maiden voyage, and Lyric is honored to pay musical tribute to this great ship of dreams.”

Single tickets to these productions are also on sale. For more information, call the box office at (405) 524-9312 or visit www.LyricTheatreOKC.org.