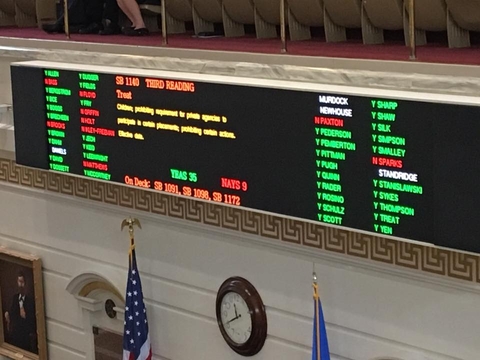 A bill that opponents say would allow religious-based adoption agencies to discriminate against same-sex couples, single people and non-Christians has cleared the Oklahoma Senate.

The bill would cover child-placing agencies that block adoptive parents who do not meet the agencies' religious or moral standards.

Republican Sen. Greg Treat sponsored the bill and said it would protect that practice from potential lawsuits.

“Bills such as SB 1140 are a clear attempt to solve a ‘problem’ that simply doesn’t exist while enshrining anti-LGBTQ discrimination into law,” said Marty Rouse, national field director for HRC. “If lawmakers in Oklahoma truly wanted to help find permanent homes for the children in the child welfare system, they wouldn’t be focusing on narrowing the pool of potential parents, which only hurts those kids. HRC calls on the Oklahoma House to reject this needless, harmful bill.”

Troy Stevenson, Executive Director of Freedom Oklahoma said "I think we decided a long time ago in this nation, that separate but equal was always separate, and never equal. Bigotry has no place in our society, and asking us to fund bigotry with our tax dollars is more than insulting, it is unconstitutional...Never forget that when hate is defeated, it always looks for another “other” to hate..."

Child welfare organizations such as the American Academy of Pediatrics, the Child Welfare League of America and the North American Council on Adoptable Children have condemned similar bills.

Research consistently shows that LGBT+ youth are overrepresented in the foster care system, as many have been rejected by their families because of their LGBT+ status, and are especially vulnerable to discrimination and mistreatment while in foster care.