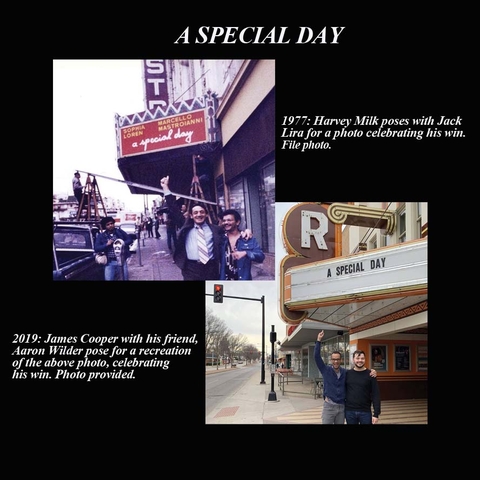 We found many similarities in Cooper’s story and that of Milk. As we celebrate Harvey Milk Day on May 22, Cooper reflects on his personal history and legacy of being the first gay member of the OKC Council and how it compares to the story of Harvey Milk.

Many comparisons have been made between the two elected officials’ story, and Cooper said he’s honored and flattered to share a sentence with someone he admires so much.

“Harvey, his campaign team, and their voters paved the way for me to serve on city council here in Oklahoma City forty years after their victory,” Cooper said in an interview with The Gayly. “Now, the task is to continue and finish our work tending to our neighbors and neighborhoods.”

Aaron Wilder, a close friend and political consultant of Cooper’s, saw so much similarity between Cooper’s story and Milk’s that he replicated an iconic photo of Milk’s win with Cooper.

After his win, Milk posed in front of a marquee sign at The Castro Theatre with Jack Lira with pointing to the title, A Special Day on the marquis. The theatre was showing the 1977 Italian drama film directed by Ettore Scola starring Sophia Loren, Marcello Mastroianni and John Vernon.

Wilder put things in motion for Cooper and himself to be pictured in front of the Tower Theatre with the same words on the marquee sign.

Wilder said he’s proud of James and proud of the work they did.

“The way Harvey Milk’s election saved young gay people by giving them hope, James gives people hope,” Wilder said. “He gives me hope. And because of him and other queer people who are running now or came before him, little gay kids in all corners of our state are going to have better lives.”

Cooper said he has a favorite quote from Milk, by which he tries to live.

Cooper grew up in Midwest City’s rural suburbs, graduated from Choctaw High School, and attended film school and studied political science at the University of Oklahoma.

While he was in high school, he heard about the Columbine shootings, and he spent much of his college career studying media violence, arguing violence like what was seen in the Columbine shootings doesn’t come from something as simple as violent video games. What he found was a connection to lack of access to mental health, broken homes, substance abuse and domestic violence resources.

“I ran for city council to address these specific concerns because I’m tired of mass shootings and scapegoating our problems,” Cooper said. “We’ve experienced too many Columbines since 1999. Our students, neighborhoods, and communities deserve better than putting band-aids on dams.”

Cooper said he first saw LGBTQ+ characters in the 1996 film The Birdcage, in a time when it was illegal to be gay. At the time, he was in ninth grade living in the suburbs.

“Harvey came out at a time when not only was it illegal to be gay, but police brutalized LGBTQ folk across the country and employers everywhere fired them from their jobs,” Cooper said. “These similarities connect Harvey to me, unfortunately. Like Harvey, I’m a fighter for what’s right, and what’s right is equality and justice under law.”

In 26 states, including Oklahoma, a landlord can evict someone on the basis that they are LGBTQ+, and businesses can refuse service to LGBTQ+ people.

Cooper said it’s important to him that Milk’s story lives on in the fight for equality, and, although LGBTQ+ history is not commonly taught in public schools, Cooper emphasizes the importance of telling LGBTQ+ stories through documentaries and literature.

“Harvey understood the importance of an LGBTQ neighborhood honoring our history, a fun neighborhood proud of our accomplishments in the face of horror and adversity, a safe place for our youth and families,” Cooper said. “OKC has a historic opportunity to continue Harvey’s legacy and the work he began in San Francisco’s Castro District when we start street enhancements to our 39th Street District in the coming weeks and months.”

Cooper said he hopes the LGBTQ+ community can learn self-care and self-love from both his and Milk’s stories, especially diving into the history of LGBTQ+ discrimination to find out from where unrealistic standards come.

Cooper is excited for this role in the City Council. His goals include making neighborhoods safer with sidewalks, bike lanes, parks, and public transportation, advocating for MAPS and education funding. 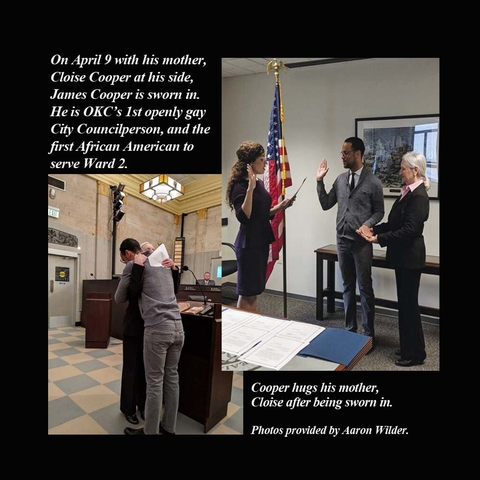