Dear Government of the State of Oklahoma 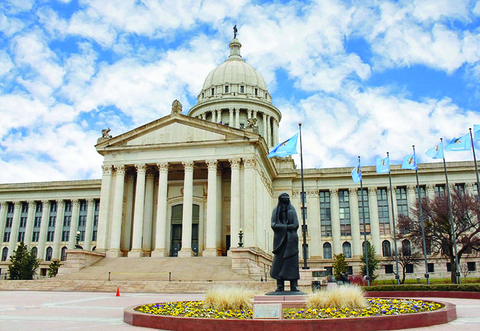 Hi, Amanda Kerri here. You may know me from the times I’ve voted, written articles and tweets insulting your intelligence and incompetence and the taxes I’ve paid. We don’t often see eye to eye.

I admit I’ve been kind of a jerk to you. I want to apologize for that photo of the state flag I made and tweeted which read, “Oklahoma: A Subsidiary of the Oklahoma Oil & Gas Association” using the association’s actual logo.

You have to admit that was pretty clever. I did start teaching myself Photoshop to do that, so at least you’re still getting people educated! How ironic; that’s why I want to talk to you.

I heard you guys ran into a bit of a bind financially. Trust me, I know how that feels since I work for you guys and I haven’t had a pay raise in a decade.

Sorry, that was a cheap shot; but not as cheap as those tax rates on oil and gas production; amirite? Up top, c’mon, high five me, that was a good one.

Look, you’re not fooling anyone around here anymore. We know that you’re pretty much always going to kiss up to the oil and gas companies and not raise taxes on them. Why? Because when you term out, then you can get some job in that industry.

You also kind of suck at managing your finances. Remember when gas was over four bucks a gallon, and you were living your best life? But you didn’t put anything into savings.

Now that gas is cheaper than bottled water, and nobody is pumping petroleum out of the ground, you’re kinda broke.

Interestingly though, you can pay legislators more than teachers for a quarter of the workload.

About that; you know teachers are fleeing the state and willingly moving to Texas for better pay, right?

And almost 100 school districts around the state have four-day weeks because they can’t afford the fifth day. Our education system is busted because you guys are broke.

At this point, we’ve accepted you’re never going to put a reasonable tax on the O&G companies, so we gotta look elsewhere. Part of that is getting major companies to open shop in the state so we can get some money coming in.

Why? Because you’re crappy to LGBT+ people.

Now, wait; hear me out. Quit side-eyeing me because you’re white and you can’t pull it off.

You know the Fortune 500, the 500 largest and richest companies in America? Well 89 percent of them have a policy prohibiting discrimination against sexual orientation, 66 percent for gender identity and 66 percent offer domestic partner insurance.

Why is that important? Glad you asked. You see, I’m the only person I’ve ever met who moved to Oklahoma to come out. Yeah, crazy right?  But I’m from Mississippi so, yeah, explains that huh?

My point; companies looking for cheaper places to do business might look at Oklahoma but decide to take a pass because those “Stuck Up Coastal Liberals” want to live and work in a state that won’t protect them and respect their rights.

These companies know (because their employees have told them) they don’t want to live someplace they’ll feel unsafe and unwelcome. It doesn’t matter how nice of an arts district you have; no one wants to live somewhere they will be subjected to hatred.

That’s one of the main reasons all the queers move away.

The longer our education system remains broken, the more our best and brightest flee the state for greener pastures, the less likely someone like GE, Siemens, Boeing, Amazon or others are going to locate here because their hiring pool is just plain dumb. See how this cause and effect thing works?

We already know most of you Bible thumpers don’t mean it. I mean, we have the hotel receipts and Grindr pics to prove it, so just give up.

Pass some employment protections, enact some hate crime legislation, then grovel to Ford for a new factory or Dow for a new plant.

Ending discrimination is good business, and it’s good for our economy. And wouldn’t some new corporate executives at the golf club to suck up to be a nice change?

Oh, yeah. Then our kids won’t grow up stupid. There’s that.