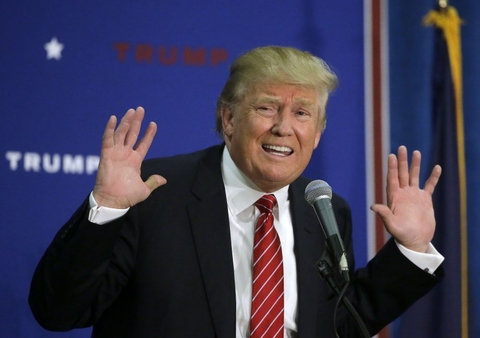 The president, according to a jaw-dropping report by Carl Bernstein published by CNN detailing egregious behavior in phone calls with foreign leaders, is delusional and dangerous, putting his own personal grievances ahead of American interests and putting American national security at risk.

None of this can possibly come as a surprise to anyone who has been paying attention to Trump's tenure, or even anyone who has listened to the president speak. But it is more disturbing evidence that this president, along with his enablers in the White House and the Republican Party, poses a direct threat to American interests and our country's future.

Drawing on multiple sources who have heard the president's conversations with foreign leaders, Bernstein paints a picture of an impulsive and delusional bully, a man so out of his depth and unhinged from reality that he spends phone calls with autocratic leaders like Turkey's Recep Tayyip Erdogan or Russia's Vladimir Putin exaggerating his own accomplishments and allowing those smarter than he to gain strategic advantage.

By contrast, he is condescending and bullying to America's allies, particularly those nations led (at the time of these calls) by women, like Great Britain's Theresa May and Germany's Angela Merkel. He has, Bernstein's sources assert, dimmed America's power while emboldening and empowering Russia. He's so happy to speak with Erdogan that Trump even takes the Turkish strongman's calls from the golf course.

According to Bernstein's sources, it was the conversations with Erdogan, a serial human rights abuser who quashes dissent and fair-minded reporting on his regime, that shaped Trump's decision-making in Syria -- "including the President's directive to pull US forces out of the country, which then allowed Turkey to attack Kurds who had helped the US fight ISIS and weakened NATO's role in the conflict," Bernstein writes.

The question is, what now? While it's jarring to see all of these damning claims compiled in such a deeply sourced exposé, the claims themselves are mostly things we've heard before, or could have surmised based on the president's public behavior (do we really think that he's more professional, coherent, and thoughtful in private than in planned press conferences and pre-written speeches?).

During the 2016 election, we were in fact privy to one particularly memorable private chat between Trump and Billy Bush, wherein the now-president bragged about grabbing women by their genitals. He has been accused of sexual harassment and assault by over a dozen women. He has appointed fewer women than any president in the previous decade (and possibly fewer than any president in 20 years). Is anyone surprised that he aggressively mistreats female heads of state?

We've all seen the president take the podium and lie to the press and the public. We've seen him invent claims about the coronavirus pandemic seemingly on the spot, putting public health and American lives at risk. We've seen him fire those who investigate his alleged bad acts. It does not take great imagination, or anything other than looking honestly at what is in front of your face, to see that this is a man dangerously unfit for the office he occupies.

And yet we've seen his support among his base and GOP leadership go largely unchanged. Few current or former members of the administration have sounded the alarm on what a liability this president truly is, perhaps because they're craven and, like John Bolton, apparently more interested in cashing in on a tell-all book than walking the country back from the brink. Or perhaps they look at congressional Republicans and conclude that all of this information is already obvious, and the president's party has chosen to defend a clearly damaged and harmful man.

According to Bernstein, "One person familiar with almost all the conversations with the leaders of Russia, Turkey, Canada, Australia and Western Europe described the calls cumulatively as 'abominations' so grievous to US national security interests that if members of Congress heard from witnesses to the actual conversations or read the texts and contemporaneous notes, even many senior Republican members would no longer be able to retain confidence in the President." But why in the world would this be the conclusion, knowing what we do about ongoing Republican support for Trump even after impeachment hearings brought to the fore the president's incompetence and choice to put self before country?

The sources in Bernstein's story have a stark choice in front of them: Continue to prop up a man who they know threatens the nation, or stand up for the future of this country and put their name and face behind the truth. If these high-level public servants really believe that "even many senior Republican members would no longer be able to retain confidence in the President" if they knew the truth, then surely Republicans in Congress -- and the rest of the country -- deserve to know just that.

There is an election in four months. American voters, and our elected officials, must know the full story of this president's first term. And we need to hear it not from cowardly anonymous sources, but from the men and women who have witnessed these abominations themselves. If those men and women are the patriots they believe themselves to be, they'll speak out, and they'd do it before November.

Editor's note: Jill Filipovic is a journalist based in New York and author of the forthcoming book "OK Boomer, Let's Talk: How My Generation Got Left Behind," and of "The H-Spot: The Feminist Pursuit of Happiness." The opinions expressed in this commentary are solely her own.