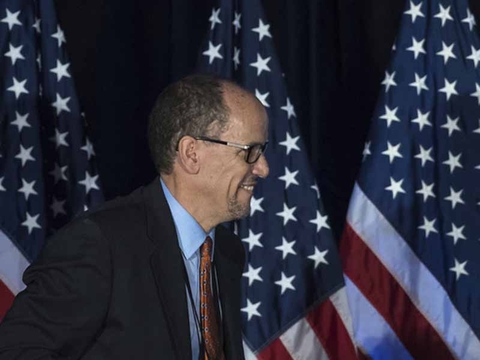 Atlanta (AP) — Democrats elected former Labor Secretary Tom Perez as their new national chairman on Saturday over a liberal Minnesota congressman after a divisive campaign that reflected the depths of the party's electoral failures as well as the energy from resistance to President Donald Trump.

Perez, the first Latino to hold the post, edged Rep. Keith Ellison on the second round of voting by Democratic National Committee members gathered in Atlanta.

A nod to his margin of 35 votes out of 435 cast, to say nothing of the lingering friction between old-guard Democratic brokers and outspoken liberal upstarts, Perez tapped Ellison to serve as deputy chair.

"We are all in this together," Perez said, calling on Democrats to fight "the worst president in the history of the United States." He added, "I am confident when we lead with our values and we lead with our actions, we succeed."

Perez had led on the first ballot among six candidates, but fell just short of the required majority.

Earlier Saturday, Perez told DNC members the party was facing a "crisis of confidence" and a "crisis of relevance."

"We need a chair who cannot only take the fight to Donald Trump but make sure that we talk about our positive message of inclusion and opportunity and talk to that big tent of the Democratic Party," Perez said.

The chair campaign was uncharted territory as Democrats face a power deficit not seen in nine decades. Republicans control the White House, Congress and about two-thirds of U.S. statehouses. The GOP is one Senate confirmation fight away from a conservative majority on the Supreme Court.

With Democrats in agreement in their opposition to Trump, the race turned on who was able to convince enough DNC members to believe his promises of rebuilding party infrastructure that withered under President Barack Obama despite his personal electoral success.

Ellison told voting members he had signatures from 750,000 rank-and-file Democrats who support his chairmanship bid. He promised to "convert them from demonstration energy to electoral energy." He pledged to prioritize small donations to finance the party, while working to "organize this whole country."

Perez got into the race at Obama's urging, but he pushed back on the notion that represented the same "establishment" label that dogged Hillary Clinton's presidential campaign. Ellison had endorsements from Vermont Sen. Bernie Sanders, who challenged Clinton for the Democratic nomination, and also from Senate Minority Leader Chuck Schumer.

For their parts, Ellison and Perez had praised each other and promised unity regardless of the outcome.

The winner succeeds outgoing Chairwoman Donna Brazile, who led the party as interim chief in the fallout from disclosure that internal party communications were stolen by hackers and leaked during the 2016 presidential campaign.

Brazile said Saturday the party has worked with cybersecurity experts to address vulnerabilities. She chided Trump for his mockery of DNC cybersecurity and his doubts that Russians are at fault.

"No, Donald Trump, you can't go to Staples and buy anti-Russian hacking software," she said, urging Congress to investigate whether Russians hacked the Republican National Committee.

No RNC emails were leaked during the 2016 campaign. Republican officials insist their party communications were not breached.