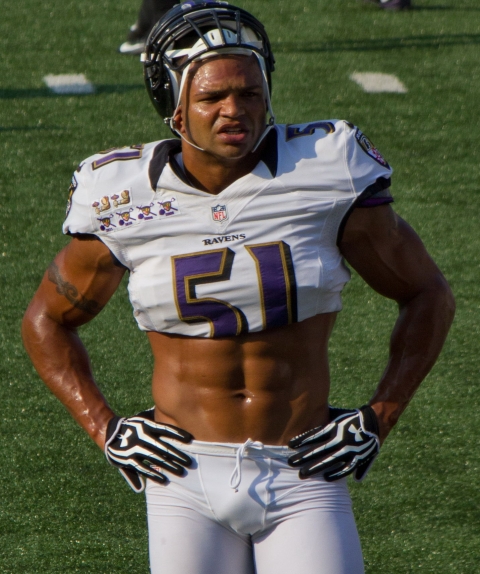 Baltimore Ravens NFL player Brendon Ayanbadejo supports gay-rights, but estimates that at least half the NFL's players would not. (file photo)

NEW ORLEANS (AP) — Brendon Ayanbadejo has heard from many players who applaud his support of gay marriage — some of them teammates, others from the opposing side of the line.

Then, just days before the biggest game of the year, he received a striking reminder of the macho attitudes that still prevail in the NFL.

San Francisco cornerback Chris Culliver said he wouldn't welcome a gay player on his team. Even though he quickly backtracked, the comments underscored what Ayanbadejo already believed:

The league is still a long way from embracing its first openly gay player.

"It's going to take a very courageous person to come out," said Ayanbadejo, a backup linebacker and special teams ace for the Baltimore Ravens.

Culliver apologized Thursday, maintaining that what he said during an interview with comedian Artie Lange during Super Bowl media day — videotaped and posted on the Internet — were not his true beliefs.

"That's not what I feel in my heart," the defensive back said.

But Ayanbadejo (EYN'-beh-day-joe), who stirred debate this season by backing a gay-rights amendment in his adopted state of Maryland, estimates that at least half the NFL's players would agree with what Culliver said, at least privately.

Responding to a series of crude questions from Lange, Culliver said the 49ers didn't have any gay players, and if they did those players should leave. "Can't be with that sweet stuff," he said, seemingly unaware that his comments would ever get back to San Francisco and the Bay Area, home to a large gay community.

"I'm sorry if I offended anyone. They were very ugly comments," Culliver said. "Hopefully I will learn and grow from this experience and this situation. I love San Francisco."

Whether he was honestly expressing his true feelings or trying to limit the damage, the comments prompted plenty of discussion about a larger issue: Is the NFL — or any major pro sport in the U.S. — ready to accept a player who comes out?

Several retired athletes have acknowledged their homosexuality after their careers were over. But no one has revealed it while actually suiting up, no doubt mindful of the divisiveness it might cause in the locker room.

For Ayanbadejo, taking a strong stand on heated issues is just part of his makeup. The 36-year-old grew up in northern California — less than an hour from the 49ers current training facility — and learned at an early age from his family to treat all people with tolerance and respect. He remembers marveling at the skill of Olympic diving champion Greg Louganis, then finding out later he was gay.

"I thought it was awesome he could go out there and do his thing," Ayanbadejo said. "No matter who you are or what you're doing, if you're doing something you love, you should be able to do that and express who you are."

That's why he thought it important to come out in support of gay marriage in Maryland, an issue that put him at odds with a vocal state lawmaker who opposed the measure. The amendment was passed by the voters in November, and Ayanbadejo was pleasantly surprised that a number of players — even from other teams — gave him a pat on his back.

Of course, there were others who didn't agree — many of them in his own locker room. Safety Bernard Pollard is among those who doesn't support gay marriage, though he insisted it doesn't affect his relationship with Ayanbadejo.

"Everybody's entitled to their own opinion," Pollard said. "Ayanbadejo has taken a position to back everything that's going on there (in Maryland). There's a lot of guys that disagree.

"But, you know, we can all disagree, and be perfectly fine. He knows I don't back what he's doing. I don't stand for it. But at the same time, that doesn't take away from us being teammates. I still respect him as a man. I'm never going to demean him. He's never going to demean me. He's got his thing, and I've got mine."

Ayanbadejo was asked what kind of player — and person — it would take to be the first openly gay athlete in the NFL. He said it would have to be someone along the lines of Jackie Robinson, who broke the color barrier in baseball and, coincidentally, would have been 94 on Thursday.

"If you're an amazing player, acceptance is going to come a lot easier," the Ravens linebacker said. "People would be like, 'Man, I didn't know gay people were such amazing athletes.' Uh, yeah, it's not that farfetched. But some people think like that."

San Francisco safety Donte Whitner, another strong supporter of gay rights, said a number of factors would have to be lined up perfectly before a gay player could make the call to come out.

Interestingly enough, considering it was a teammate who stirred up the issue during Super Bowl week, Whitner said the 49ers would probably be one of the most accepting squads.

"I believe there would be no issues with our team," he said. "I believe San Francisco would probably be the best city to do it in."

Niners CEO Jed York said he needs to become a leader on the issue of gay rights. After the Super Bowl, he intends to set up a meeting between Culliver and members of the LGBT community in the Bay area.

"I can't force anybody to think or to act the way that I want them to," York said. "But what I can do is give them the opportunity to experience other cultures, other communities."

While Ayanbadejo praised the efforts of NFL executives like York, as well as the backing he received from his own team on the gay-marriage issue, the first player to come out will surely face plenty of obstacles.

"I think it would be tough," 49ers receiver Randy Moss said. "That person would get ridiculed and just beat up verbally. I don't know if they'd be able to handle it."

But Moss said it's time — past time, really — for everyone in the NFL to acknowledge that gay players have always been part of the league. And, he added, to realize they're not going to hide their true feelings forever.

"It's not going anywhere," Moss said. "We're all the same people. What is it — a 16th of an inch of our skin color — that separates us from one another? I don't really look at gays in sports as a problem. We just need to accept it and move on."