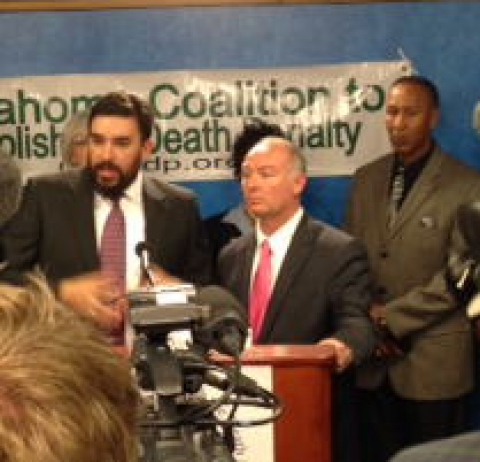 Oklahoma’s lack of transparency with death row executions started in 2011 when state lawmakers approved a measure that made the purchase of lethal injection drugs secret.

House Bill 1991 exempts the deadly drugs from the guidelines of the Central Purchasing Act, which is a public record of all state supplies purchased with taxpayer money.

“It could be because they weren’t sure what drugs would be used since that was the start of this whole thing as manufacturers started refusing to sell the lethal drugs to states in capital punishment cases,” said state Rep. Mike Ritze, (R-Broken Arrow), one of the four co-authors of HB 1991.

Most of the manufacturers are owned by European corporations where the death penalty is banned. Participating in an execution at any level could result in serious sanctions or fines.

However, Ritze admitted he does not remember the complete rationale behind passage of the bill. Ritze also acknowledged that he supports capital punishment.

The 2011 law also keeps secret the supplier of the drugs, the doctors and pharmacists involved and the name of the people who administer the lethal cocktail to the condemned inmate. State officials have never addressed why the types of drugs, amount and source of payment have remained secret.

However, Oklahoma reportedly has spent $50,000 on lethal injection drugs since 2011 from an account described as “petty cash.”

Ritze, a physician, said the lack of transparency was not a cover-up, but rather lawmakers wanted to protect the identity of the supplier in order to avoid threats or potential violence against them. The state House passed the measure by a 94-0 vote and the state Senate approved HB 1991 by a 42-3 count.

“I think it was the right thing to do,” Ritze said of HB 1991. “The whole thing on executions is everything has gone smoothly until the drugs became scarce.”

Since manufacturers stopped selling the drugs to states that use capital punishment, Oklahoma had resorted to compound pharmacies, which are not regulated by the federal government. That scenario created serious doubts about the reliability and effectiveness of the lethal injection drugs, Oklahoma City attorney David Slane said.

Convicted killer Clayton Lockett was scheduled to die April 29 in the first of an execution doubleheader, but the whole ordeal went awry when the sedative that supposed to render the condemned man unconscious did not work.

Lockett died of a heart attack 43 min after the execution began. An IV was placed in his groin area [femoral vein], which failed. Reporters who witnessed the execution said the inmate thrashed about and tried to speak after receiving the sedative midazolam. According to the physician in the execution room, Lockett was not unconscious when the final two drugs were administered, which would have caused him extreme pain and paralyzed all of his muscles, including his vocal cords. “People react differently to drugs,” Ritze said.

According to the physician in the execution room, Lockett was not unconscious when the final two drugs were administered.

State Sen. Connie Johnson (D-Forest Park) said her worst fear materialized Tuesday because of the uncertainty the lethal injection drugs created. That particular cocktail had never been used in the U.S. prior to April 29. Johnson was one of three state senators who voted against HB 1991.

Since the botched execution was first reported, Johnson has called for a moratorium on executions and an independent probe handled by out-of-state investigators.

“This is a conversation that is not going away,” she said of the execution process and the death penalty in general. “I can’t imagine a bigger debacle nationally or internationally.”

Three days after Lockett died, the United Nations made public a claim that Oklahoma’s execution may have violated international law.

Attorney Slane, in conjunction with the ACLU’s Brady Henderson, told reporters they may file a federal class action lawsuit that would claim Oklahoma violated Lockett’s Eighth Amendment rights. The amendment prohibits state-sponsored executions that are considered cruel and unusual.

The execution of Charles Warner, who was scheduled to die at 8 p.m. last Tuesday, was put on hold indefinitely until state officials can determine what went wrong in Lockett’s case.

Lockett and Warner had been a thorn in the state’s side since challenging the constitutionality of Oklahoma’s secret execution protocol. The pair made their legal claim because drugs previously used were unavailable and earlier executions had been marked claims of pain by inmates as they died.

This is the timeline of events for Lockett after he entered Oklahoma's death chamber on April 29th. This report was sent to Governor Mary Fallin on May 1st by Department of Corrections Director Robert Patton:

5:22 p.m. – Offender Lockett was placed and restrained on the execution table.

5:27 p.m. -Phlebotomist enters execution chamber to determine appropriate placement for IV. The Phlebotomist examined offender Lockett’s left and right arms, left and right legs and both feet to locate a viable insertion point. No viable point of entry was located. The doctor then examined the offender’s neck and then went to the groin area.

6:18 p.m. – The IV insertion process is complete. Insertion point was covered with a sheet to prevent witness viewing of the groin area.

6:23 p.m. - Oklahoma Department of Corrections Director Robert Patton gave Warden Trammell approval to proceed with the execution.
- The chamber shades were raised
- Lockett refused his chance to say any final words
- Warden Trammell starts the execution and Lockett is injected with Midazolam through the IV

6:30 p.m. - The doctor checked Lockett and said he was still conscious.

6:33 p.m. - The doctor checked Lockett again and said he was unconscious so Lockett was given vecuronium bromide and then potassium chloride through the IV.

6:42 p.m.– Shades lowered; doctor and phlebotomist check IV.
(this is the time officials realized something went wrong and lowered the shades so witnesses could no longer see into the execution chamber).

6:44 p.m.– The doctor and phlebotomist checked Lockett’s IV and found his vein had collapsed.

6:56 p.m. - Director [Patton] calls off the execution under authority granted by the Governor.

It was later determined Lockett died of a massive heart attack.

The director of the Department of Corrections is now recommending a complete revision/review to all execution protocols.

Calling for an indefinite stay of all executions until a thorough review is completed.