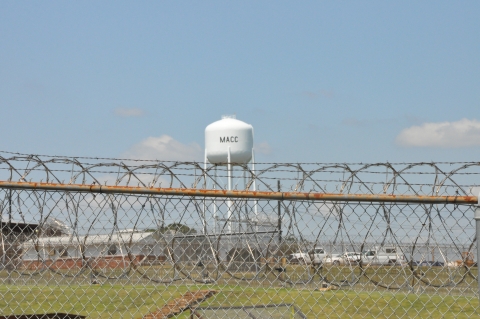 The real Robbie Johnson is not at all what we were expecting from a man who has been in prison for the last 29 years. He is outgoing, well-spoken and genuine. After corresponding with him now for about a year, we have some background on his life in prison and before. We have come to
see him with many questions about his life and the crimes.

From his letters, Robbie brought us up to date on his early life. “I grew up gay - I was gay from
the time I came out of my mom,” explains Robbie. “I can recall being five years old and being drawn
to the male persuasion. I didn’t think of sex, but was always thinking of what it would be like to
kiss another boy.

“I always stayed around the girls. We played dolls, jacks, and all the other things girls do. I was
called names and sometimes chased home.”

It took Johnson a long time, however, to “come out of the closet.”

“My sister Rhonda, who is two years younger than me, looked out for me. Like most gay boys, I was
teased growing up. She would fight all my battles for me,” added Johnson.

“Robbie was always a very caring person; he wouldn’t hurt anything,” said Rhonda Johnson, Robbie’s
beloved sister. “He wouldn’t even hurt a spider. He’d make me do it. He is a lot like my mom. They
are both very passive people. Neither of them wants to cause a scene. Robbie was a very dependent
person, both as a young boy and as a teen.”

Born in Lawton in 1962, Johnson spent his first few years in Germany with his mom and step-father,
a soldier. “He was a mean man,” Robbie recalls. “He molested me at least once that I remember. A
few of his friends also did separately. Usually, they would take me to a barn and have me bend
over. There was no penetration; just between my legs.

“I went to high school with my two twin cousins, Lonny & Jonny Macias, AKA Korece Carr and
Angelica, both female impersonators,” Johnson continues. “We were a hoot in school. I graduated
from Lawton McArthur in 1980.”

In February 1982, Johnson met Donnie Nelson, a DJ for Mark’s Toy Box (in OKC) and this was his
first real relationship. The bar was sold to Tony Sinclair and renamed The
Bunkhouse. This bar is now Partners at NW 36th  St. and May Ave.

“They talked me into stripping there between drag shows,” Johnson writes. “Ginger Lamar was the MC.
I worked with Kitty Litter and Fritz Capone to mention a few.” Johnson said he and Nelson split up
after ten months.

Johnson then met David, who turned out to be Erika Lamonde. Lamonde would later become Miss Gay
Oklahoma. “He did a perfect Cher,” said Johnson. David later went back to his boyfriend and Robbie
decided to join the Navy  and see the world.

After a short stint in the Navy, Johnson’s mother declared that Johnson was her only son and was
able to obtain a hardship discharge for him.

Afterwards, he found himself back home in Lawton living with his mom. On Feb. 3,
1984, while out celebrating his birthday with his cousin, Lonny, Johnson met Jay Wesley
Neill and his life would never be the same.

According to Johnson, Neill went from lust to obsession in the ten months they were together.
Johnson alleges he was abused psychologically, emotionally and physically by Neill, a claim backed
up by his sister, Rhonda.

Rhonda spoke about the close relationship she had with her brother and how they were always
together. “Since I was nine and he was 11 his friends were my friends,” she confided. “In high
school we snuck into the bars together, went to Wichita Falls together. We both loved disco music.
We were both gay. Life was good for a moment…for  a brief moment.

“Then came Jay,” Rhonda sighs. “The devil,” she said as her voice rises. “He turned all our lives
upside down. When they first got together it was like a week or two and they were getting an
apartment together. I was younger than him and when you are young you don’t think about ‘stable’
relationships. If I had known how ‘unstable’ Jay was I would have stressed to Robbie to get out.”

Rhonda said in the interview she was “extremely dominant in her family” and she felt about 90% sure
Robbie would not have stayed in the relationship had she been forceful about it.

“He fooled me, that Jay. When bad people are bad, they know not to act badly. They are on their
best behavior. He asked all the right questions and was very nice. And (when he started changing
and keeping Robbie away from us) I told him straight up, ‘You’re not going to get between me and my
brother.’ But he did.

“So Jay & Robbie were together for ten months, but it seemed like years,” Rhonda went on to
explain. “I had already had to kick Jay’s ass a couple  of times after Robbie had called me at 2am
telling me Jay had beaten him up again.

“We lived in the same apartment complex and I could be there literally in a few minutes. One time I
came barreling in that door (at the time I was a very angry person) and there
was Robbie in the corner, squatted down and Jay had the recliner above Robbie as if he
were going to smash it in to him, as if instilling fear was the way to control him. Finally, I just
had to tell Robbie I couldn’t do it anymore, but he wouldn’t leave Jay. I regret that now.”

When asked how she learned about Robbie being involved in the bank robbery, Rhonda replied, “Mom
and I had gone to Charlie’s Drive-In for lunch in Lawton a day or two
after the crime. The composite drawing came out in the paper. Mom said, ‘Does that look like Jay
(Neill) to you?’ I said, ‘Why no.’ I took her back to work and I went to work and then she called
and said, ‘The FBI agents were just here asking about Robbie.’ Mom had Robbie’s car and she told
the FBI that the car was hers and they told her the car was in Geronimo the day of the robbery. She
said, ‘the hell it was.’

“I went to talk to the detective. I said I want to know why you are at my mom’s office harassing
her. He answered a phone call at that time and after he hung up he said, ‘Your brother was arrested
in San Francisco.’”

Rhonda said in this interview with The Gayly, “I didn’t even know Robbie was in San
Francisco.”

Rhonda concluded, “The day Jay was put to death I can’t say I was jumping for joy, but I was not
remorseful. I just thought that was the end of the bad thing that happened. Trust me; I do think he
got what he deserved. I do understand and feel for those people and those families who lost folks.
But believe me; those people in that bank were not the only victims. My brother, my mother…my whole
family were all victims as well. All because of Jay Neill. When Robbie met Jay, our lives changed
forever.”

Still to come: Comments from Oklahoma City attorney Mark Henrickson, co-counsel for the re-trial
and excerpts from the four (4) hour interview with Robbie Grady Johnson about the day of the crime
and the arrest in San Francisco.