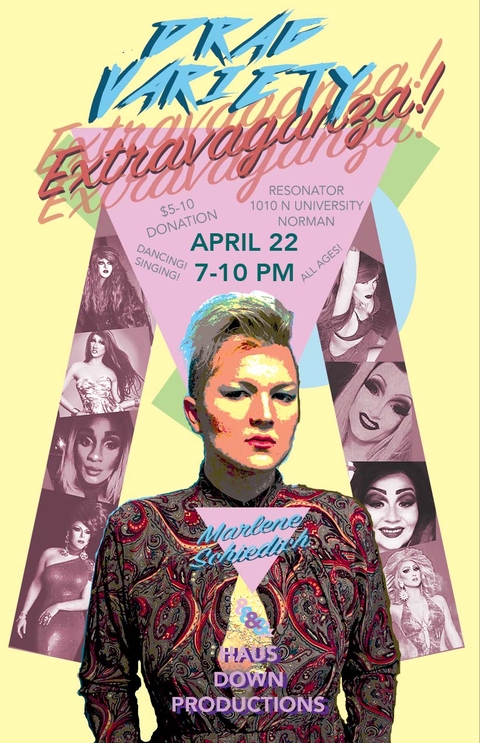 The show is presented by drag queen Marlene Schiedich and the Norman drag troupe Haus Down Productions. Photo provided.

Drag queens are known for their extravagance. Expect nothing less at this one-of-a-kind Drag Variety Extravaganza, April 22 at Resonator (1010 N University, Norman).

An all-ages show, attendees will experience singing, dancing, lip syncing and experimental performances from local drag queens, a live raffle, and cash bar. The doors will open at 7 p.m., and the show will start at 8. Tickets are a suggested donation of $5 to $10, with 13 and younger admitted free. Proceeds from the event support local entertainers, and the creation of documentary about drag culture in Oklahoma.

Come support local entertainers for a one-of-a-kind event at Resonator. This drag show is the premier of the low-class, mid-western, high-camp transgender drag queen Marlene Schiedich. Schiedich is the persona of local artist Laurence Myers Reese.

This event supports the launch of Reese’s career in the drag world, and his documentary on this process, “RE: Season 11 Audition (FTM Plz Consider),” for which he received a Momentum Spotlight award from the Oklahoma Visual Arts Coalition.

“RE:” examines queer identity in pop culture, focusing on the creation of an audition tape for reality television show “RuPaul’s Drag Race.” It will premiere May 19-20 at Momentum Ada, a festival of film and new media in Ada, Okla. with keynote speaker John Waters. This festival is hosted by the Oklahoma Visual Arts Coalition and East Central University Ada.

___
Laurence Myers Reese is an artist living in Norman, OK. His artistic practice as a cultural producer includes working as a curator, writer and arts administrator. He is executive director of Individual Artists of Oklahoma (IAO Gallery). His work has been featured both online and in several exhibits across the region.