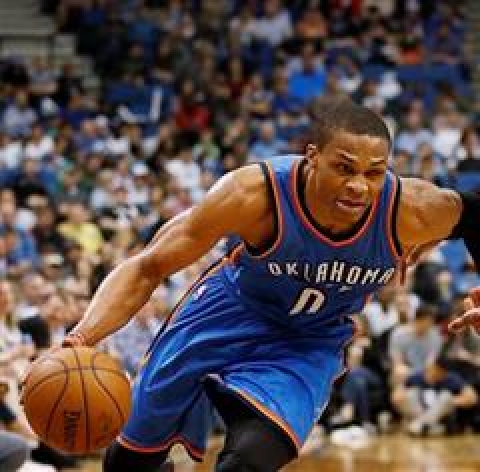 It wasn't as fun sometimes for Durant when he heard folks discussing it.

Westbrook's season will go down as one of the best in recent NBA history. The Oklahoma City star averaged 28.1 points per game, joining Allen Iverson as the only point guards to win the scoring title in the past 35 years. He finished fourth in the league with 8.6 assists per contest and second with 2.1 steals a game. His 7.3-rebound average is the highest by a point guard since Jason Kidd averaged 7.5 in 2007-08.

But Westbrook's opportunities increased because Durant, last year's MVP and a four-time scoring champion, missed most of the season with a broken bone in his right foot. As Westbrook shook loose from Durant's significant shadow, there was plenty of noise about whether the two will be able to co-exist next season.

"I couldn't really enjoy it as much because when I watch TV, I hear all this comparing two teammates together all the time," Durant said Thursday, one day after the Thunder's season ended. "It's kind of tough to watch it sometimes. Then I hear everything — you know, if Russ is playing well, then I'm getting traded, and all this other stupid stuff. I'm like, 'Let me just enjoy my teammate having success.' I just tried to shut all that stupid stuff off and enjoy this killing spree he went on these last few months."

And what a spree it was.

Westbrook was the Western Conference Player of the Month in both February and March. He had 11 triple-doubles, the most in a season since Kidd had 13 in 2007-08. He had four straight triple-doubles at one point, and back-to-back 40-point triple-doubles. Neither had been accomplished since Michael Jordan did both during an incredible stretch late in the 1988-89 season. Westbrook had nine triple-doubles in a 20-game span from Feb. 24-April 5 during which he averaged 31 points, 10.3 assists and 9.3 rebounds.

Most of that damage came after he scored 41 points in the All-Star game, a point short of Wilt Chamberlain's 53-year-old record, on his way to being named the game's MVP. He is just the 12th player to be All-Star MVP and scoring champion in the same season.

He did most of it without Durant, who only played 27 games this season. And in the second half of the season, the M-V-P chants normally reserved for Durant were raining down on Westbrook.

"It was just amazing to see, both as a leader and a player," Durant said.

The Thunder also played the last month of the season without Serge Ibaka, an emerging offensive player and one of the league's best defenders. Several other Thunder players missed significant time with injuries.

It was difficult for Durant to watch Westbrook carry so much of the load.

"I wish I could have taken a lot of pressure off of him sometimes, but just seeing him grow was pretty cool," Durant said.

Westbrook said it was a great learning experience.

"I could be a better leader when I put my mind to it, be able to go out and find ways to make my teammates better throughout a season, regardless of how my game is going," he said.

Westbrook was criticized at times for his high shot volume and his tendency to shoot jumpers when his greatest asset is using his speed and explosiveness to attack the basket.

He scored a career-high 54 points last Sunday against the Pacers, but he took 43 shots. He tied or set a new career high for 3-point attempts three times in April while trying to keep his team afloat. His team went 2-10 when he scored 38 or more points, 0-7 when he attempted eight or more 3-pointers and he led the league in turnovers per game. Such numbers led to accusations of Westbrook being selfish and reckless.

Westbrook isn't satisfied. He felt if he had played better late in games, the Thunder might still be playing. Eight of Oklahoma City's last 12 losses this season were by five or fewer points.

"I want to come back and be a better closer," he said. "I think the last few games throughout the season, we lost a lot of games in the last five minutes of the game. As a point guard and as a leader, I've got to be able to close games the way that we want to."