Elizabeth Warren to LGBT teen, "You're going to get through this" 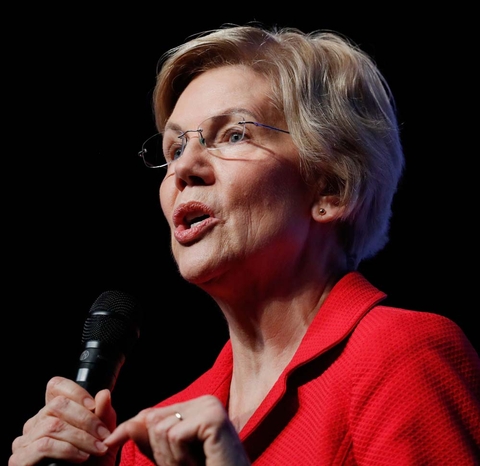 Sen. Elizabeth Warren on Sunday got personal with a young voter who asked about acceptance in her own life.

During an unusually long and open session with the Massachusetts senator in Iowa, Raelyn, a 17-year-old high school senior, took the microphone and broke from a string of familiar political questions.

"I was wondering," Raelyn asked, the emotion written on her face, "if there was ever a time in your life where somebody you really looked up to maybe didn't accept you as much? And how you dealt with that?"

Warren paused and responded with a story she has rarely told, about the time she told her mother that her first marriage was ending.

"My mother and I had very different views of how to build a future. She wanted me to marry well, and I really tried, and it just didn't work out," Warren said, her voice cracking ever so slightly.

She continued: "And there came a day when I had to call her and say, 'This is over. I can't make it work.' And I heard the disappointment in her voice. I knew how she felt about it. But I also knew it was the right thing to do and sometimes you just gotta do what's right inside and hope that maybe the rest of the world will come around to it. And maybe they will, maybe they won't, but you gotta take care of yourself first."

Warren has been open about her family struggles, and during a CNN town hall in March, she spoke of how her mother kept her family from losing their home while working a minimum wage job. Warren often speaks cheekily about a first marriage, but rarely brings up the pain surrounding its end, when she was only in her early 20s. She is now married to Bruce Mann.

Raelyn said her immediate family knows she's part of the LGBTQ community, but her extended family who were at her home visiting for the holidays did not. She said she was nervous to ask the question out of concern for what her visiting family would say.

"I was really nervous. Honestly, I was most nervous about, 'OK, what if this is the question that gets aired on TV and then there's a bunch of questions about it at home."

She said she was touched by Warren's answer.

"I loved it. I was scared. I didn't want her to feel, almost, pressured to answer it, because I know being put on the spot and being on that big of a pedestal in front of America, it's kind of like, you don't want to put all of your personal information out there," she said.

"You don't want to have everybody see everything, every single side of you. And I was just really touched that she had the courage to answer that question in a different way than she has spoken before. And that she cared enough about me and about her for voters to be able to open up."