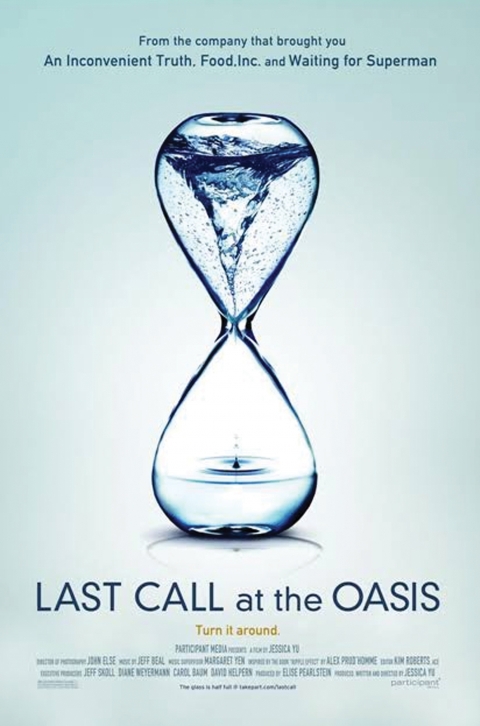 In April we observe Earth Day. This year is was the 22nd. Earth Day is the birthday of the environmental movement begun in 1970. Its inception was to be a national teach-in on the environment. By 1990 Earth Day went global. Earth Day 2000 linked global warming and clean energy. By Earth Day 2010, it was becoming obvious the deniers, oil lobbyists, and foot-dragging politicians had created a cynical wedge in the public. The ravages of climate change are now quite evident. Water is emerging as a dire issue that many still need to learn much more about so I have selected what I think is one of the best docs made on the subject. The second film concerns another sort of struggle, one that millions of women are facing daily.

Last Call At The Oasis:  Director Jessica Yu put this together in 2012 and it’s still right up to date when it comes to water. Yu manages to take a highly complicated subject and break it down in a slick and fast-paced manner. Perhaps most impressive is how she manages to cascade one piece of evidence after another pouring the viewer's consciousness full with a gnawing awareness that we are indeed running out of time when it comes to plentiful fresh water.

When drought "seems" to end, many of us stop even thinking about it and go back to our same old wasteful ways of water consumption. It’s been easier to turn away from the building water crisis in various Third World countries, but now becoming harder to be so blind when water pollution incidents appear daily in our own nation and weekly in our state.

Erin Brockovich, a recent visitor speaking in many Oklahoma locations on fracking and water pollution, appears in Yu's film giving her rap on one town's experience with pollution over decades.

Scientist Jay Famiglietti specializes in these water issues and flatly states in Yu's film that "We're screwed." Yu does indicate a bit of light if we rapidly develop essential recycling and conservation practices and to think before we drink.

A Girl In The River: The Price of Forgiveness: This remarkable 2016 Oscar winner for documentary short subject will take only about 45 minutes of your time but the impact will hopefully last long enough to bring about a lessening or even an end to the so-called "honor killings" of women (and some men).

Sharmeen Obaid-Chinoy documents the attempted murder of an 18-year-old woman named Saba in Pakistan who marries a man she loves against the wishes of her family. This leads to her own relatives beating her, shooting her in the head, tying her up in a sack, and dumping her in the river for dead even after they promised on the Koran they would not harm her.

Saba survived and we follow her journey through the courts in Pakistan as the scarred girl seeks prosecution of the guilty parties. In heartbreaking fashion, we watch as the community and legal pressures mount on Saba to "forgive" her male attempted murderers and allow them to return to their lives with no punishment. It is stunning to watch Saba's father look in the lens and say he is proud of his dastardly act and that he is now highly respected. By the end, we see how the victim is steadily transformed into practically being viewed as the guilty party.