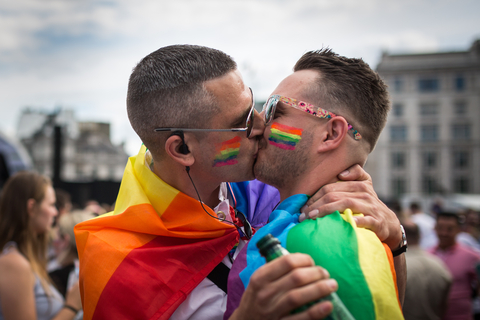 Six in ten LGBTI people in Europe avoid holding hands in public for fear of discrimination, according to a major EU survey that lays bare the everyday inequalities faced by lesbian, gay, bisexual, trans and intersex people and the lack of progress made in stemming it.

The study, which interviewed 140,000 people across Europe, found that 43% of LGBT people had been discriminated against in the past year -- an increase of 6% on the agency's previous survey in 2012.

That trend was even more pronounced for trans people, six in 10 of whom said they had experienced discrimination -- up from 43%.

Authors say the survey, by the EU's Agency for Fundamental Rights (FRA), is the largest of its kind ever carried out. Its findings highlight how in 2020, LGBT people in every European country continue to face difficulties in the workplace, while socializing and even while walking down the street.

"The results show little progress over the past seven years," FRA director Michael O'Flaherty wrote in the foreword. "Imagine being afraid to hold your loved one's hand in public, skipping office banter to avoid divulging with whom you share your life, choosing the long way home to side-step potentially hostile ground, or enduring ridicule every time you show your personal identification," he added.

"In the year 2020, these remain realities for all too many lesbian, gay, bisexual, trans and intersex people across the European Union and beyond."

Intolerance worsening in France and Poland

People in the EU's 27 member states, as well as the United Kingdom, North Macedonia and Serbia, responded to the study.

Two in five said they had been harassed in the year before they took part, while one in five trans or intersex people said they were physically or sexually attacked.

Economic inequalities also shone through; a third of LGBTI people said they had trouble making ends meet, and many said they faced discrimination in other areas such as finding housing or obtaining medical treatment.

And a strikingly small proportion of people said they have or would report harassment to authorities; the figure was as low as 4% in Romania and 5% in Hungary.

"More worryingly, we have recently witnessed within the EU anti-LGBTI incidents such as attacks on prides, the adoption of 'LGBTI ideology-free zone' declarations, fines for LGBTI-friendly advertisements and others," added Helena Dalli, the European Commissioner for Equality.

The past decade has seen a curtailment of LGBT rights and an increase in public discrimination in some parts of Europe.

In Poland, for instance, the governing Law and Justice Party has increased its use of homophobic rhetoric, pride parades have been targeted by counter-protesters, and pro-government publications have distributed stickers declaring cities an "LGBT-free zone." And 68% of Polish respondents said intolerance there has increased since 2012, the largest change in any country.

More than half of respondents in France also said intolerance had increased in their country.

By contrast, over 70% of people in Ireland and Malta said it had declined. Ireland legalized same-sex marriage in 2015 and Malta became the first country on the continent to ban conversion therapy in 2016.

But after a decade of slow progress, O'Flaherty warned that inequalities could be made worse by the coronavirus pandemic.

"Too many LGBTI people continue to live in the shadows, afraid of being ridiculed, discriminated or even attacked," he said. "Their job and healthcare difficulties may worsen due to Covid-19. Policymakers should take note and do more to actively promote full respect for rights of LGBTI people."

The UN sounded a similar warning on Thursday, as 96 of its member states signed a joint statement on ensuring that coronavirus relief measures do not widen structural barriers faced by LGBT people.

"Lesbian, gay, bisexual, trans-and gender-diverse people, who are disproportionately represented in the ranks of the poor, the homeless, and those without healthcare, will be deeply impacted by the pandemic and, unless we take urgent action, this impact will be felt over generations," said Víctor Madrigal-Borloz, the UN's Independent Expert on Protection against violence and discrimination based on sexual orientation and gender identity.