(FAYETTEVILLE, Ark.) — A Fayetteville alderman, John La Tour, is attempting to stand with solidarity amongst complaints about his alleged sexual harassment and bigotry. He demanded that a restaurant employee confirm whether she was a man or a woman, threatening that he could prove his own gender through indecent exposure.

According to a Facebook post, “He demanded she [the server] pick a gender declaiming loudly that he couldn’t tell if she was a man or a woman. She is not [transgender] and does not in any way present any ambiguity about gender in any way” [sic].

The post continued, “He then explained that he was a man and could prove it by dropping his pants and showing his penis.”

According to the Associated Press, La Tour said he intended to ask a server to dance because the music at Arsaga's at the Depot was too loud Friday and wanted to make sure she was a woman. He said a voter-approved ordinance that protects gay, bisexual and transgender people from discrimination lets people choose their gender based on how they feel that day. La Tour opposed it.

The restaurant's owner told the Arkansas Democrat-Gazette (http://bit.ly/1pFkTCc ) he and La Tour have had a "friendly" debate but declined to comment until talking to La Tour.

However, yesterday, March 20, at 12:34 p.m., La Tour posted on his official City Council Facebook page, “Everyone who lives in Fayetteville, AR should never eat or treat themselves at any of Cary Arsaga’s establishments. I will never go to any of these again.”

This morning, he deleted the above post and replaced it with: “I have often stated that the best economic development plan we can have as a City is to get out of the way and let entrepreneurs chase their dreams. I stand by this statement. Cary Arsaga is one of those entrepreneurs. I am glad to cheer him on, and I wish him well.”

Laura Phillips, a member of the Executive Committee for For Fayetteville, calls this “backpedaling” and an attempt to “spin the story a different way,” as he is unaware that the Internet “is forever.” Dozens of reactions show that much of Facebook agrees.

She told The Gayly, “We hold elected officials to a high standard. For [La Tour] to assume that since [the server is] a woman she would want to dance with him, no. For him to even ask, ‘Are you male or female, because you can’t tell these days,’ no. For him to assume he could prove it, no.”

She went on to say, “I’m pretty sure he thinks he’s being funny, but the fact of the matter is it’s not funny, it’s harassment and degrading. It’s not what we as Fayetteville citizens expect from our elected representatives.” 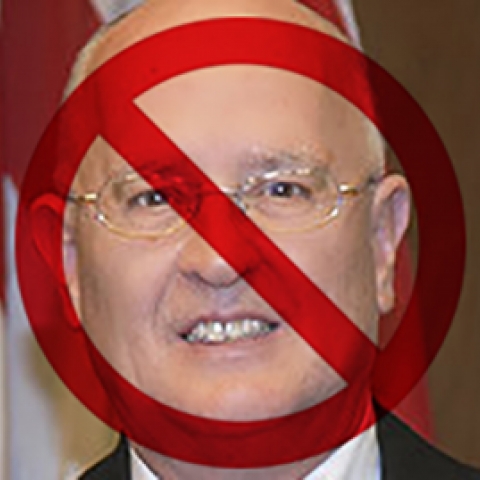 In addition to the homophobic implications of La Tour’s remark, his misogynistic suggestions towards women and the dehumanization of servers have struck a chord with the internet and with Fayetteville itself.

Phillips said, “I don’t care who it is – when you assume that the servers are there for your fulfillment it shouldn’t matter whether they are male or female. They aren’t going to dance with you if they don’t want to.”

In addition to the allegations of bigotry and threatened indecent exposure, reports show that John La Tour received a total of $2,000 from the Duggar family for his campaign. An internet meme is now circulating that points out his Josh Duggar-esque mentality (who, by the way, is his friend on Facebook), saying, “John S. La Tour claims the transgender community are sexual predators / But then threatens to show his penis to a female stranger in a crowded restaurant.”

He has thus been widely accused of sexual harassment, attempted sexual misconduct and blatant homophobia.

La Tour has been described by many sources as woefully unprepared and obstructionist, using flippant remarks and rarely voting for anything in his time in office.

For information on For Fayetteville and to sign its petition for La Tour’s resignation, visit the For Fayetteville page on Facebook or visit https://www.change.org/p/alderman-john-la-tour-resign-from-fayetteville-....

The Associated Press and the Arkansas Democrat-Gazette contributed to this report. http://www.arkansasonline.com.