FDA eases restrictions on gay blood donation, but not really 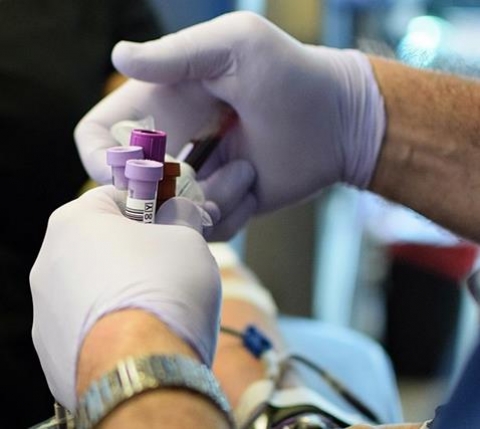 The Food and Drug Administration today announced that they are easing blood donation restrictions for gay men. (File photo)

The FDA announced today that they have issued final guidance on blood donation by MSM (Men who have sex with Men).

“’The FDA’s responsibility is to maintain a high level of blood product safety for people whose lives depend on it,’ said the FDA’s Acting Commissioner Stephen Ostroff, M.D. ‘We have taken great care to ensure this policy revision is backed by sound science and continues to protect our blood supply.’”

“As part of today’s finalized blood donor deferral guidance, the FDA is changing its recommendation that  men who have sex with men (MSM) be indefinitely deferred – a policy that has been in place for approximately 30 years – to 12 months since the last sexual contact with another man.”

As can be seen, it’s okay to donate blood if you are gay or MSM, as long as you haven’t sexually acted on that orientation for at least a year. In other words, most gay men are still excluded from donating blood.

Just over a year ago, the FDA, according to Towleroad.com, had announced it “has no further plans to discuss changing its longstanding ban on gay men donating blood.

Reaction from LGBT advocates was swift, expressing frustration over the government’s refusal to update its 30-year-old policy, put in place at the beginning of the AIDS epidemic. Buzzfeed reported in December 2014: “The announcement frustrated LGBT advocates who said the unilateral ban on blood donations unfairly stigmatizes gay men. Now advocates are looking to bypass the FDA advisory panel by pressuring upper tiers of the Obama Administration.”

And apparently, that pressure began to be effective. In May, NBC news announced, “The Food and Drug Administration has formally proposed letting gay and bisexual men donate blood, so long as they've abstained from sex for a year.

“The recommendation changes the current guidance, which is that any man who has ever had sex with another man in his entire life should never be able to donate blood. It's a policy that has enraged gay rights groups and that is virtually impossible to enforce.

"’No transmissions of HIV, hepatitis B virus, or hepatitis C virus have been documented through U.S.-licensed plasma derived products in the past two decades,’ the FDA says in its recommendation.”

Now, in December, the FDA made its formal announcement. According to the Associated Press, “Gay rights activists said the new policy is a ‘step in the right direction,’ but falls short.

“In 2006 the Red Cross, the American Association of Blood Banks, and America's Blood Centers called the ban ‘medically and scientifically unwarranted.’"

The FDA made Q&A about the change available on its website. Important points made by the agency include:

“The FDA has revisited its donor deferral recommendations to reduce the risk of transmitting human immunodeficiency virus (HIV) several times over the past 10 years. These reviews have been undertaken publicly at meetings of the FDA Blood Products Advisory Committee and the HHS Advisory Committee for Blood Safety and Availability (ACBSA). In 2010, the ACBSA found that the deferral policy for men who have had sex with other men (MSM) was suboptimal and it recommended that studies be conducted to better inform a potential policy change.

“Based on the evidence now available, FDA has changed its recommendation from the indefinite deferral for MSM to a 12 month blood donor deferral since last MSM contact.”

According to the AP, “While the one-year-ban has been criticized by activists it matches policies in other countries, including Australia, Japan and the U.K.”

Most advocates think the exposure window is much smaller than one year. According to the San Francisco AIDS Foundation’s website’s information on the HIV window period, “There's a period of time after a person is infected during which they won't test positive. This is called the ‘HIV window period.’

“The window period can be from 9 days to 3 months, depending on the person's body and on the HIV test that's used. During that time, you can test HIV negative even though you're HIV positive. You can still catch HIV from someone who is in the window period. In fact, there is evidence that a person in the window period is more likely to pass the virus on.”

So, despite much scientific evidence that a one year ban of men having sex with men is too long, the FDA continues to effectively ban blood donation by gay men, and other MSM.