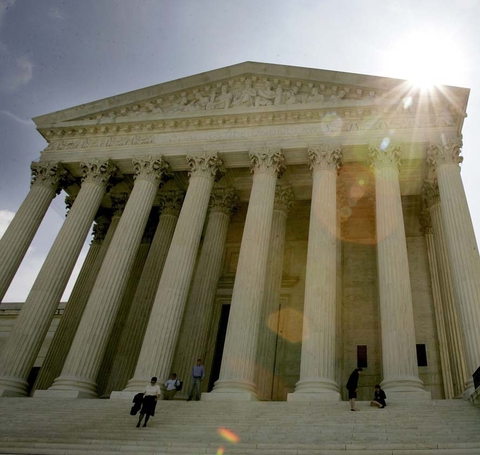 The Justice Department's argument was included in the latest filing in one of the most important cases of the upcoming Supreme Court term. The issue, coupled with whether the law also protects claims of discrimination based on sexual orientation, is of critical importance to LGBTQ+ rights supporters who are seeking broadened protections.

The case will be heard on October 8, and the decision will come down in the heat of the presidential campaign. A major fact as well will be that Justice Anthony Kennedy, who often voted in favor of the LGBTQ+ community, is no longer on the court, and has been replaced by Justice Brett Kavanaugh.

Title VII, of the Civil Rights Act, that bars discrimination based on sex "does not bar discrimination because on transgender status," Solicitor General Noel Francisco argued in a brief filed with the Supreme Court Friday evening.

Lower courts -- and the federal government -- have split on the issue of whether Title VII provides such protections.

During the Obama administration, the Equal Employment Opportunity Commission, an independent agency responsible for enforcing federal laws that make it illegal to discriminate based on sex, took the position that federal law does encompass protections for gender identity and sexual orientation. That is the position of the agency today, as posted on its website.

But in 2017, then-Attorney General Jeff Sessions issued a memorandum stating that Title VII's protections on sex discrimination do not encompass such protections. After that memorandum, the Justice Department took that position in court. That means -- as things stand -- the position of the Justice Department, which represents the government at the Supreme Court, is different than that of the EEOC.

Notably, the Justice Department's brief filed Friday was not signed by members of the EEOC. Regardless, when the agency will be bound by however the Supreme Court rules.

Francisco emphasized in his brief that the case does not concern whether "as a matter of policy, Title VII should forbid discriminating on the basis of transgender status."

"Congress has made that policy choice in other statutes," Francisco wrote.

In one case, Aimee Stephens worked for six years as a funeral director before announcing that she was transitioning. She informed her boss in 2013 and two weeks later was fired.

Her boss believed that "coming to work dressed as a woman was not going to be acceptable." Stephens filed a charge of sex discrimination with the EEOC, the commission brought suit and won. Before the Supreme Court she is represented by the ACLU, whose lawyers argue in court papers that under Title VII sex must be "irrelevant" to employment decisions.

"Any exception to Title VII permitting sex discrimination against transgender employees would have to come from Congress, not this court," they wrote.

Critics of the Justice Department's position say that it could slam the door shut on claims regarding sex stereotypes and gut court precedent.

"For instance if a woman is fired for not acting feminine enough at work, or wants to wear pants, she could not prevail in her claim unless she can show that men are allowed to violate sex stereotypes at work," said Jon Davidson, chief counsel of Freedom for All Americans. "So if the employer requires all employees to conform to sex stereotypes, the DOJ says there is no Title VII violation."

But lawyers for the funeral home argue in briefs that it is a "wrong" to compare Stephens to a "biological female who wants to dress as a female."

"Here, Harris Funeral Homes would have responded to a female employee who insisted on dressing as a man while working with grieving families the same way it responded to Stephens," Bursch argued. "Because it does not disfavor one sex compared to the other, Harris does not discriminate based on sex. "