Federal office says Kellyanne Conway should be removed from government 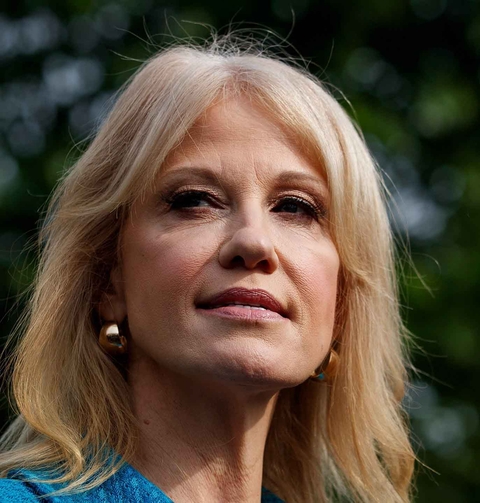 A federal agency is recommending that White House adviser Kellyanne Conway be removed from federal service, saying she violated the Hatch Act on numerous occasions.

The US Office of Special Counsel said Conway erred by "disparaging Democratic presidential candidates while speaking in her official capacity during television interviews and on social media."

The office is unrelated to Robert Mueller and his investigation.

Special counsel Henry Kerner wrote in a letter to President Donald Trump Thursday that his office's investigative report found that Conway was a "repeat offender" of the Hatch Act.

"Ms. Conway's violations, if left unpunished, would send a message to all federal employees that they need not abide by the Hatch Act's restrictions. Her actions thus erode the principal foundation of our democratic system -- the rule of law," the letter said.

"If Ms. Conway were any other federal employee, her multiple violations of the law would almost certainly result in her removal from her federal position," Kerner's letter said. "Never has (the office) had to issue multiple reports to the President concerning Hatch Act violations by the same individual."

A separate statement from the Office of the Special Counsel, issued alongside the report, said that "given that Ms. Conway is a repeat offender and has shown disregard for the law, (the office) recommends that she be removed from federal service."

The recommendation carries no actual power to remove Conway. That decision is up to Trump, who has expressed nothing but support for Conway.

"Others, of all political views, have objected to the (the office's) unclear and unevenly applied rules which have a chilling effect on free speech for all federal employees. Its decisions seem to be influenced by media pressure and liberal organizations -- and perhaps (the Office of the Special Counsel) should be mindful of its own mandate to act in a fair, impartial, non-political manner, and not misinterpret or weaponize the Hatch Act," Groves said.

White House counsel Pat Cipollone rebuked the report in a letter response to the special counsel's office, writing that the office did not give the White House or Conway time to respond to the report.

White House counsel's office staff spoke with Kerner, according to the letter, to talk about the timing of the request for a response. Kerner allegedly told the office that he "took great offense" to Conway's comment in May in front of the press, when she told reporters, "If you're trying to silence me through the Hatch Act, it's not going to work," and "let me know when the jail sentence starts."

According to Cipollone's letter, Kerner also complained on the call repeatedly "about the level of 'disrespect' towards (the Office of Special Counsel) that (was) perceived in that comment."

House Oversight Chairman Elijah Cummings announced Thursday afternoon that his committee will hold a hearing with the Office of the Special Counsel and has invited Conway "to answer for her violations." The hearing is scheduled for June 26.

The special counsel's office has previously said that Conway violated the Hatch Act during two television interviews advocating for and against candidates in the 2017 Alabama special election for US Senate.