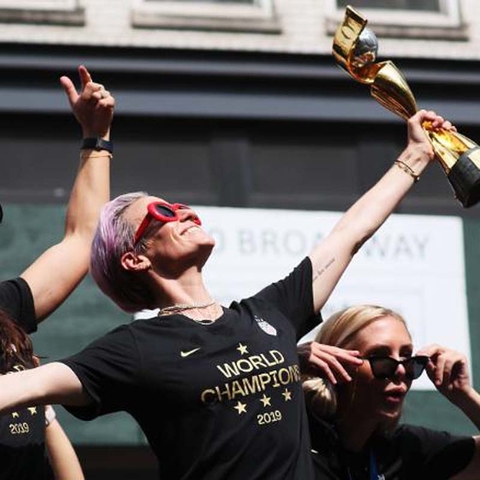 The US Women's National Team returned from their victorious World Cup tour to a parade Wednesday. CNN photo.

Two female Democratic senators are calling for equal pay for female athletes playing for the country's national teams, as the US Women's National Team returned from their victorious World Cup tour to a parade Wednesday -- and their pending lawsuit demanding equal pay.

Democratic Sens. Dianne Feinstein of California and Patty Murray of Washington state introduced the bill, which would amend the US Code to require equal pay for men's and women's national athletic teams, on Wednesday.

The bill was inspired by the lawsuit brought by 28 members of the USWNT in March against the US Soccer Federation, according to Feinstein's office. The suit alleges that the organization discriminated against the women by paying them less than members of the men's national team "for substantially equal work." The soccer federation and the plaintiffs tentatively agreed last month to mediation, which is expected to begin now that the World Cup is over.

The bill would add "wages and other compensation" to the existing code requirements for "equitable support and encouragement for participation by women where separate programs for male and female athletes are conducted on a national basis." It would also require US sports federations to submit reports to Congress every year showing compensation data by race and gender.

"Despite the incredible advancements made by women in sports, female athletes in sports like soccer and hockey are paid significantly less than their male counterparts," Feinstein said in a statement. "America cheered as the women's soccer team won an historic fourth World Cup, but our support shouldn't end with ticker-tape parades. All women should receive fair and equal pay, including our women athletes in every sport."

Murray added in a statement, "The only way to truly honor our National Team is to pay them what they so clearly deserve: equal pay for their far more than equal work."

The pair are not the first lawmakers to file legislation inspired by the US women's soccer team's fight for equal pay.

Democratic Sen. Joe Manchin of West Virginia introduced a bill Tuesday that would withhold federal funding for the United States' hosting of the 2026 men's World Cup until the men's and women's national soccer teams receive equal pay -- though whether federal funding will play a key role in the upcoming games is unclear.

Additionally, New York Gov. Andrew Cuomo signed pay equity legislation for the state at the parade Wednesday celebrating the US Women's National Team, a symbolic gesture of support in the soccer players' fight for equal pay.