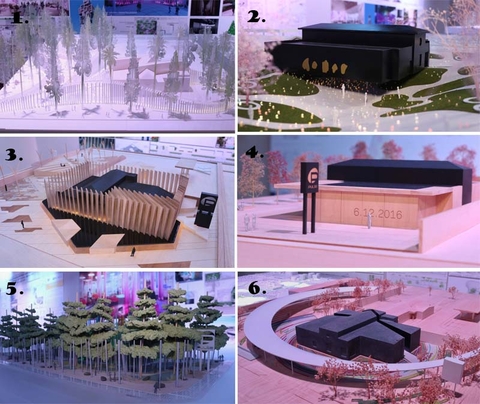 The six proposals for the Pulse Nightclub Memorial. CNN photos.

More than three years after the Pulse nightclub shooting in Orlando, Florida, a nonprofit foundation is seeking public comment on final proposals for a memorial and museum honoring the 49 victims of the deadliest act of violence against LGBT people in the history of the country.

The National Pulse Museum is expected to open in 2022 on a 1.75-acre parcel about a third of a mile from the Pulse Memorial.

In the early hours of June 12, 2016, Omar Mateen shot and killed 49 people and injured more than 50 others during the club's Latin night, claiming allegiance to ISIS.

The shooting marked the deadliest mass shooting in the US until one year later, when 58 people were murdered at a Las Vegas country music concert.

A foundation created after the tragedy, onePULSE, will unveil the final design proposals to the public on Thursday in Orlando. People will be able to leave comment until October 10 and a jury will make a final selection at the end of the month.

Barbara Poma, club co-owner and foundation CEO, said the designs are products of recommendations and ideas drawn from surveys and consultations throughout the nation.

"We had these six magical words that came out through the survey -- peace, love, hope, acceptance, community and strength," she told CNN. "And that was part of their guiding light on these designs."

In June, Florida lawmakers proposed plans to designate the nightclub a national memorial.

Here is a look at some of the final six proposals:

In this design, like others, 49 trees are planted on the property -- representing each victim, according to Poma.

"The museum itself is a perpetual light -- kind of a statue of a human," she said. "That talks about the human heart, speaking of hope. It would be so tall it would be able to be seen from almost anywhere in our city."

"How we memorialize the Pulse Nightclub shooting influences the nature of the community's physical and spiritual renewal," MVRDV, an architecture and design firm, writes in its proposal.

"In contrast, the National Pulse Memorial is calm and stoic. Its black volume communicates a midnight quality, even in brilliant Florida sunshine, while gold accentuates the facade fractures. Seemingly levitating atop a carved landscape of 49 trees chosen by victims' families, atmospheric lighting enhances its spatial experience."

"This team really utilized the idea of keeping the building but also a way to surround it and make it peaceful," Poma said. "This is really a water feature. And so the water would run over and run off of the plain where the names of the victims would be."

"We propose a memorial with a garden and sanctuary that is both solemn and celebratory," wrote the design team led by Diller Scofidio + Renfro and Rene Gonzalez Architects. "The sanctuary sits within a contemplative sound garden of cypress trees, natural ponds and 268 reflective columns, each of which honors the life of someone who was affected but survived the shooting."

"Pulse becomes the center of gravity; it radiates and transmits," wrote the design team of Coldefy & Associés with RDAI. "Water is the connecting element, from the existing fountain, it becomes a shallow reflecting pool encircling the club. In memory of the Angels, a palette of 49 colors lines the basin and radiates towards the public spaces."

"You don't want to go to a place where it's sad," said Myrlande Bebe, whose son, Jason Josaphat, was killed at Pulse. She recently viewed the design ideas.

"I'm tired of feeling sad and crying all the time," she said. "I want to go to a place that brings me joy. ... That is how our loved ones were before they took them away from us. There were happy. They had beautiful souls."