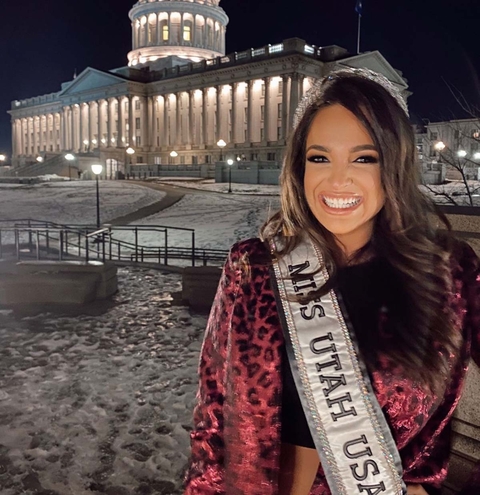 This year, her first time on the national stage, she'll be competing as her most authentic self.

Slawson, who is bisexual, will be the first openly queer contestant in the Miss USA pageant's 68-year history.

The 25-year-old is a 7-year pageant veteran, but her Miss Utah USA win this month marked the first time she'd ever discussed her sexuality onstage.

"After years of trying to be somebody else, it turns out being yourself is what works," she told CNN.

The response to her transparency was largely positive, she said -- "They picked me!"

But even before she was crowned, Slawson didn't shy from the tough conversations. On Instagram, she's shared her bipolar diagnosis, a suicide attempt at 19 and her struggle to accept herself.

Her past is part of why she chose mental health awareness and suicide prevention as her primary platforms.

Her home state of Utah ranks fifth in the nation for its suicide rates, according to the state health department. LGBTQ+ youth are particularly vulnerable to depression and more likely to attempt suicide.

She called her participation in the pageant "monumental" for members of Utah's LGBTQ+ community.

"It represents a facet of our community that is deeply struggling," she said.

Pageants have a conservative history

Until recently, the pageant industry has largely excluded LGBTQ+ competitors.

The next year, Swe Zin Htet became the first gay contestant to compete for Miss Universe. She represented Myanmar, a country where homosexuality is illegal.

Though Htet failed to advance to the Top 20, her fans the Miss Universe Organization, which also hosts the Miss USA pageant, stood behind her.

"Miss Universe will always champion women to be proud of who they are," Miss Universe Organization President Paula Shugart said at the time.

The organization did not respond to CNN's request for comment for this story.

The date for the Miss USA pageant hasn't been announced yet, but in the meantime, Slawson has kept a busy schedule.

She plans to tour local schools and businesses to discuss suicide prevention. She'll continue to be transparent about bipolar disorder and her sexuality, too, to shift the stereotypes of what a pageant competitor should look and sound like, she said.

"Pageantry comes with an allure of perfection, and I don't think that's changed," she said. "I just think that the definitions of beauty and perfection are expanding."