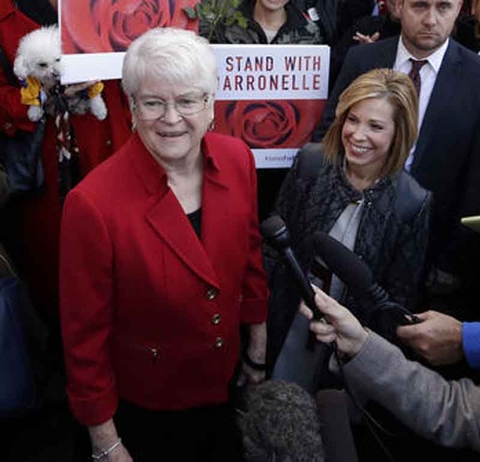 When Barronelle Stutzman lost her appeal to the Washington state Supreme Court in February, she and her attorneys vowed to appeal to the US Supreme Court. Stutzman, doing business as Arlene’s Flowers, refused to provide flowers for a same-sex wedding.

Stutzman’s is represented in the appeal by the Alliance Defending Freedom (ADF), the same group that Attorney General Jeff Sessions spoke to last week in a controversial speech from which the press was barred. ADF also represents the Colorado baker who refused to make a wedding cake for a same-sex couple. That case was previously appealed to the Supreme Court.

The ADF wrote in a press release, “Alliance Defending Freedom attorneys represent the floral artist, Barronelle Stutzman, whom the state attorney general and the American Civil Liberties Union sued for acting consistently with her faith.”

The ADF also is trying to conflate any expression into the freedom of speech protections in the First Amendment, saying, “The breadth of the [state supreme] court’s reasoning, which extends to nearly all speech created for profit, is particularly hazardous, as is the extreme nature of Barronelle’s punishment, which threatens to shutter her business and personally bankrupt her. This Court’s review is needed to prevent the state from silencing professional speech creators with dissenting religious views.”

So now, in the ADF’s opinion, creating a floral arrangement, or making a wedding cake, is “professional speech”.

According to the Seattletimes.com, “A Benton County Superior Court judge last February [2016]  ruled that Stutzman’s religious beliefs did not allow her to discriminate against the couple and that she must provide flowers for same-sex weddings, or stop doing weddings at all. The trial court also imposed a fine of $1,000 and legal fees of just $1.”

In light of the fine, claims that the decision would bankrupt her appear overblown, although that would also depend on the percent of her business that represented flowers for wedding.

The intent of these cases, activists agree, is to get the Supreme Court to grant the right to discrimination against LGBT+ people, and probably others, based on marital status or sexual behavior outside of marriage.

Michael Scott, the ACLU attorney for the same-sex couple in Washington, said, “the decision recognizes ‘human beings and their lives’ while upholding the ‘core value of American law’ regarding human dignity,” in an interview with the Times.

“’If this case were about an interracial couple we wouldn’t be here today,’ he added.”