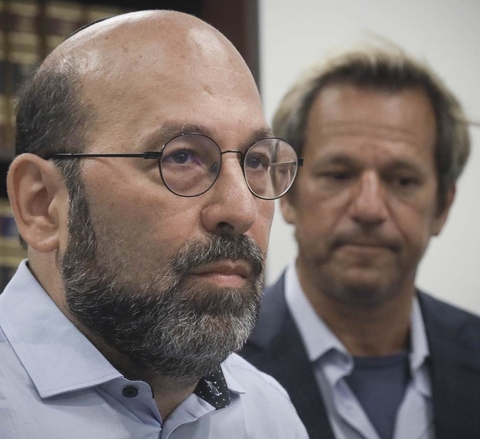 Jay Goldberg, left, and Barry Singer, right, say they were sexually abused while they were students at Yeshiva University High School for Boys in Manhattan. Photo by Bebeto Matthew/AP via CNN.

Nearly 40 former students of the all-boys Yeshiva University High School in New York have filed a lawsuit against the school, accusing it of ignoring allegations of serial sexual abuse.

The lawsuit accuses former principal George Finkelstein of targeting the children of Holocaust survivors and then imploring them "to not add to their parents' suffering by telling them about his assaults."

Like Finkelstein, several more former faculty members, including a dorm counselor, rabbis and teachers are also named in the lawsuit as alleged abusers, though they are not defendants. Kevin Mulhearn, an attorney for the plaintiffs, told CNN none of the alleged abusers are named as defendants because they couldn't be found, though he may amend the complaint if he's able to track any of them down. Mulhearn said Finkelstein has lived in Israel for years and is thus outside jurisdiction.

Finkelstein could not be reached for comment Friday by phone or email. He has denied the allegations in the past, the Associated Press reported.

The school did not respond to multiple calls from CNN. A spokesperson for Yeshiva University declined comment to the Associated Press, citing pending litigation.

The 38 plaintiffs attended Yeshiva University High School between 1953 and 1992. At a news conference Thursday, former student Barry Singer said he did not fully understand that he was abused until he had children of his own.

"These rabbis had such ultimate power in that school that the sense I had was that they could do anything they wanted to," Singer said. "There was no one to go to."

The complaint focuses charges on the school for negligent supervision, negligent retention and negligent failure to provide a safe and secure environment.

According to the lawsuit, several assaults were reported by students to school administrators, but "their complaints always fell on deaf ears." In one instance, alleged in the lawsuit, a rabbi and the then-principal observed Finkelstein sexually and physically abusing a boy in the hallway but did not report it. In another, a boy and his father met with an administrator to report the boy's abuse but no action was taken, the lawsuit states.

The lawsuit illustrates the lasting effects the alleged abuse had on victims, from mental health issues such as depression to drug use to divorce. Mulhearn said he also represented them in lawsuits filed in 2013 and 2014, but that both were dismissed because the statute of limitations had expired.

The current lawsuit was filed under New York's Child Victims Act, which reopens the window for those who suffered sexual abuse as children to pursue legal action. Hundreds of lawsuits have been filed since the law went into effect earlier this month.