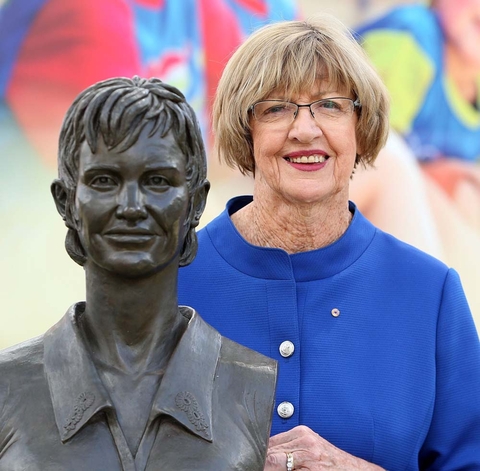 Former tennis player Margaret Court has called for recognition at next year's Australian Open in honor of the 50th anniversary of her grand-slam winning year.

Court won all four majors in 1970, beginning with the ninth of 11 Australian Open titles in an illustrious career that yielded a record 24 grand slam victories. Only German Steffi Graf in 1988 has since achieved the calendar grand slam in men's or women's singles.

However, the 77-year-old, now a Pentecostal pastor in Western Australia, has attracted controversy for voicing opposition to same-sex marriage and saying tennis is "full of lesbians."

It prompted former rival Billie Jean King to call for the Australian's name to be stripped from Melbourne Park's Margaret Court Arena at last year's tournament, and organizers said at the time that they do not agree with Court's views.

But now Court wants a personal invite to the 2020 tournament, much in the same way that her male counterpart Rod Laver was celebrated at this year's Australian Open to mark 50 years after his second calendar grand slam.

"They brought Rod in from America," she told The Age and the Sydney Morning Herald. "If they think I'm just going to turn up, I don't think that is right. I think I should be invited.

"I would hope they would pay my way to come like they paid for his and honor me. If they are not going to do that, I don't really want to come."

In a separate interview, Court added that she felt she had been victimized for her views on same-sex marriage.

"Just because I said, 'Do you know what the Bible said about marriage?' -- I have nothing against gay people. I have them in my church, I'm going in to do a healing school this morning, people sit in there, I treat everybody equally," she told Nine News Australia.

"But I said what the Bible said and being a Christian, I got into trouble for that. So no, I feel they shouldn't all bring that into my tennis.

"I think I should be honored. Back in the amateur days, I played, I represented my nation, I loved my nation, that's all we knew."

Tennis Australia did not immediately respond to CNN's request to comment, but in a statement sent to The Age said the organization was "in the process of working through" how to mark the anniversary.

"As previously stated, Tennis Australia recognizes the tennis achievements of Margaret Court. Although her views do not align with our values of equality, diversity and inclusion," it said.

Court's record of 24 grand slam titles is unmatched in both the men's and the women's game. Serena Williams is second on the all-time list with 23, ahead of Graf on 22.

The Australian Open runs from January 14-27 next year.