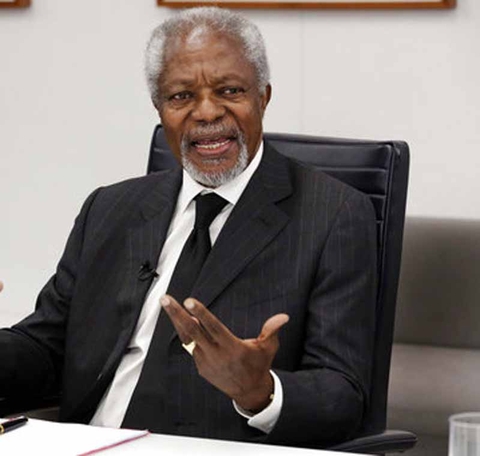 The former United Nations chief also discounted hopes for a Russian-led plan to stabilize Syria and starkly dismissed chances for Israeli-Palestinian peace under their current leaders.

Flanked by three fellow members of his "Elders" group — including a former president, prime minister and U.N. peace envoy for the planet's worst crises — Annan implored "mainstream leaders" in the West and elsewhere to counter the rising tide of nationalism.

He said he saw no benefit in a military attack on North Korea, arguing it would increase the threat of nuclear war, and wagered that if Trump pulls the United States out of the global climate change agreement, "I would put money on the table that they would go back in four years or so."

Annan described Trump as "one of this year's leaders who come into town, who come into office and believe they have all the answers," scapegoating Mexico or China for longer-term structural problems — like a welder who is paid $25 an hour being replaced by a robot that requires no health care — and brushing aside international efforts to tackle security to migration challenges.

"Sooner or later, they go through a reality therapy and discover that it is not as simple or as easy as they thought," Annan said in an editorial board interview with the AP, accompanied by former Irish President Mary Robinson, former Norwegian Prime Minister Gro Harlem Brundtland and longtime peace mediator Lakhdar Brahimi. "They either have to adjust ... or they stick to their guns and fail totally and ride out of town."

U.S. leadership "is being weakened now by the statements we hear out of Washington, the uncertainty and the fact that the messages keep changing and sometimes rather fast," said Annan, the 2001 Nobel Peace laureate.

And even when U.S. diplomats go around the world and make "good sense," he said the inevitable question will be: "Where does your leader stand?"

The Elders' fears about populism extend to Europe.

"In Holland, it's worse," said Brahimi, bemoaning that people took comfort from a vote that returned moderates to power but showed far-right gains.

Annan, who like Brahimi failed as a U.N. envoy to halt Syria's civil war, now in its seventh year, expressed little faith in a recent agreement negotiated by Russia, Turkey and Iran to set up "de-escalation zones" in the Arab country.

He said his mediation approach was guided by getting all of conflict's protagonists to buy in. He didn't see backers of Syria's rebels, such as Saudi Arabia, Qatar or the U.S., endorsing the strategy of Russia, which has used its military to keep Syrian President Bashar Assad in power. Iran also is backing Assad, while the U.S. is fighting in Syria to defeat the Islamic State group.

"On the question of the zones, I'm not sure how it's going to work," Annan said, citing "many players in that limited theater" and the risk of a deadly accident, especially as some appear "ready to torpedo any agreement you make."

Annan, who led the U.N. from 1997 to 2006, also shared his preoccupation with North Korea's escalating crisis. The North is racing toward the capability to threaten the U.S. mainland with a nuclear warhead, and the Trump administration has delivered various suggestions for eliminating the danger, including possible pre-emptive strikes. The main U.S. effort, however, is pressuring China to rein in North Korea, its wayward ally.

"The major parties involved are talking past each other," Annan said, and negotiating with Beijing must occur "behind closed doors."

"China is a powerful and a proud country. They don't want to be seen to be taking instructions given to them publicly," he said.

And of possible U.S. strikes, Annan said "one can bluff, one can threaten, but I really don't see a military solution that will not make the problem much, much worse."

The Israelis and Palestinians haven't engaged in serious negotiations in years, and Annan said "given the leadership that is in place, I don't see a possibility of making a deal." He said ending the conflict is "crucial" even as international attention focuses on Middle East wars in Iraq, Syria and Yemen.

"To find a solution, you need to have in place leaders who are prepared to deal," he said. "We haven't seen that for a long time."

Annan, who met in New York this week with new U.N. Secretary-General Antonio Guterres and the 15-nation Security Council, said a U.S. pullout out of the 2015 Paris climate agreement would be "unfortunate." The deal compels countries to set goals for reducing carbon emissions to stem global warming. Trump has threatened to cancel the accord and called climate change a "hoax."

Annan said the U.S. would "isolate itself" by withdrawing, as "the rest of the international community will go ahead." American states, businesses and even energy companies would realize the economic and environmental benefits of a "green revolution" and would buck Trump's national policy. And he predicted the next president would reverse the decision.

The Elders disagreed, however, on the ultimate effect of a broader U.S. retreat.

Brundtland said Macron and a new generation of European leaders would step up.

"If the U.S. withdraws from the world, we will get used to it," he said.