The gay 9/11 hero whose legacy lives on through rugby 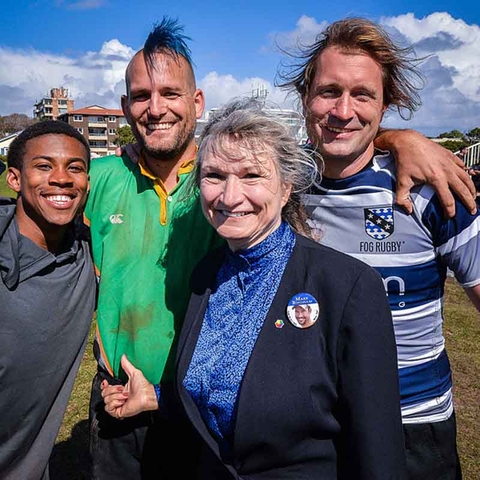 Alice Hoagland recalls the last time she spoke with her son, Mark Bingham. It was September 11, 2001, and Bingham was on board the hijacked United Flight 93.

"He just called and said 'Mom, I want to tell you that I love you. I'm on a flight from Newark to San Francisco.'

"'Three guys have taken over the plane and they say they have a bomb.'"

The hijackers, of which it later transpired there were four, were part of the al-Qaeda terror cell that crashed commercial jets into the Twin Towers of the World Trade Center in New York City and the Pentagon in Washington DC, killing 2,937 people.

Flight 93, however, never reached its intended target, thought to be a major political target in Washington such as the Capitol. Passengers heroically battled with the hijackers before the plane crashed in a field near the town of Shanksville, Pennsylvania.

Bingham lost his life along with 39 other passengers and crew members taking the total death toll of the attacks to 2,977.

It was the most lethal attack ever staged on US soil.

Yet out of the carnage and devastation, has come a form of healing for Hoagland and the flourishing of a sporting community close to Bingham for much of his life.

Mention the Bingham Cup to members of the Atlanta Bucks rugby team and all will know what the tournament represents as well as the story of the man it's named after. Jeffrey Thorpe, who has played the rough and tumble sport with the Bucks for the past two years, tells CNN Bingham is someone who is "really respected" among his friends and teammates.

The Bucks are part of International Gay Rugby (IGR), a network for inclusive teams located all over the world.

Founded roughly 15-years-ago, the Bucks are one of close to 30 American IGR teams. According to Gus Ventura, North American trustee for IGR, Bingham's inspirational story has had "an enormous impact on the growth (of the) sport" in the US and helped "mitigate the homophobia" gay athletes often encounter.

Bingham was introduced to the sport in high school and played college rugby at University California Berkeley. As a gay man, he went on to play for IGR club the San Francisco Fog and was instrumental in setting up New York's Gotham Knights, another gay and inclusive team.

Bingham's death at the age of just 31 was mourned by the many close friends he made in the game, some of whom decided to set up a competition in his honor.

The Bingham Cup began in 2002 under the banner of the IGR and has been held every other year since. What began with just a handful of gay and inclusive teams has expanded rapidly.

Last year, 78 teams from 20 countries came to Amsterdam, the Netherlands, to play in the Bingham Cup, making it one of the largest 15-a-side rugby tournaments in the world.

Speaking in a recent World Rugby documentary, Legacy: The Mark Bingham Story, former teammate and friend Chris Zerlaut said the impact the competition has had has been overwhelming.

"When you have hundreds of people come up to you and say: 'I was on the verge of suicide, Mark changed my life. I had no family. Now, I do' -- it's amazing," Zearlot says.

There are currently more IGR teams in the US than any other country.

Austin Booth, who has played with the Atlanta Bucks for a year, told CNN that taking up rugby has changed his life and made him part of a "brotherhood."

"I've made friends and met people I never would have interacted with in any other capacity," he says. "It's given me a chance to travel and meet teams and people from other states. It's something I never would have done if I hadn't been part of this."

Hoagland describes being "really touched" whenever she hears such stories.

She recalls her son pointing out before 9/11 that there were "not enough gay heroes" and that gay people tended to be treated with derision and jest in media and entertainment.

Yet it's a source of pride, Hoagland adds, that Bingham continues to inspire others to challenge those stereotypes. She recites the words of Senator John McCain, who attended Bingham's memorial service in 2001, and highlighted how the actions of the passengers aboard Flight 93 may even have saved the politician's own life in Washington DC..

Thorpe, of the Atlanta Bucks, suggests Bingham's legacy has been to show that gay people can not only be heroes but that they can compete in the most physical and competitive sports.

"A lot of people think that because you are LGBT, you can't play something this aggressive. That's false. Everyone wants to join a team and (have) that camaraderie."

The Bingham Cup has enabled many people to do just that while bringing together gay and inclusive teams from around the world. Last year's edition saw women's teams compete for the first time while organizers hope the 2020 event in Ottawa, Canada, will be even bigger.

There are now IGR teams on five continents, an incredible feat given the first gay and inclusive rugby team was only founded in London, England, in 1995.

For Hoagland, who has attended every staging of the competition, it's a fitting way to remember her only son. "Mark would say rugby is my life," she says, while he also loved the camaraderie and togetherness the sport encourages.

Perhaps more powerfully, however, the friends Hoagland has made in attending the Bingham Cup have helped her to cope with the loss of a man she describes as "remarkable" and her very own "hero."

"The way they remember and honor him has helped me profoundly to deal with my grief," she says.

"It's astounding to me how very inclusive and how very much it allows the young men and women to play together and be a cohesive part.

"The joy the young men and women have when they play reminds me very much of Mark's joy, she continues.