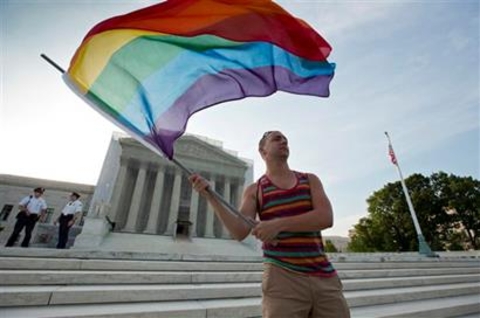 A demonstrator waves a rainbow flag in front of the Supreme Court earlier this year. (AP Photo/J. Scott Applewhite, File)

Washington (AP) — Gay marriage cases are on the Supreme Court's agenda with enough time for the issue to be argued and decided by late June.

The justices could decide as early as Jan. 9 to add same-sex marriage to their calendar this term, according to an update Tuesday on the court's docket. That date is the first time the justices will meet in private in the new year to consider adding new cases.

Most, if not all, of the cases they accept for review by mid-January will be argued in late April. The court would then have two months or so to come to a decision.

Lawyers for same-sex couples in Kentucky, Michigan, Ohio and Tennessee rushed to get their legal papers filed in time for that early January conference.

The couples are appealing a decision by a panel of federal judges in November to uphold anti-gay marriage laws in those states. The 6th U.S. Circuit Court of Appeals in Cincinnati is so far the only federal appeals court that has sided with states that are seeking to preserve bans on same-sex marriage since a Supreme Court decision in June 2013 struck down part of the federal anti-gay marriage law.

Four other appeals courts — in Chicago, Denver, San Francisco and Richmond, Virginia — have ruled in favor of gay and lesbian couples.

Between those rulings and the Supreme Court's decision in October to turn away state appeals, the number of states allowing same-sex couples to marry has risen to 35.

Now, though, the existence of a split among the appellate courts has made Supreme Court intervention very likely.

Interviewed on Radio Television Suisse recently, Justice Antonin Scalia declined to answer a reporter's questions on same-sex marriage. "I should not speak to that because we will doubtless have that case in front of us fairly shortly," Scalia said.

People on both sides of the gay marriage divide had expected the court to agree to resolve the debate in October. The justices had before them appeals from five states that sought to uphold their bans. Same-sex plaintiffs who won in the lower courts also pressed the Supreme Court to intervene.

The justices did not explain their surprising refusal to get involved then, although Justice Ruth Bader Ginsburg said publicly that there was no urgency to the court's involvement as long as lower courts were ruling uniformly. The 6th circuit's ruling changed that equation.

Kentucky, Michigan and Ohio also are calling for the court to hear and decide the issue soon, while Tennessee is urging the justices to let the appeals court ruling stand.

Louisiana's same-sex marriage ban also is on the Jan. 9 conference agenda, but that case is unusual in that it has yet to be heard by a federal appeals court.