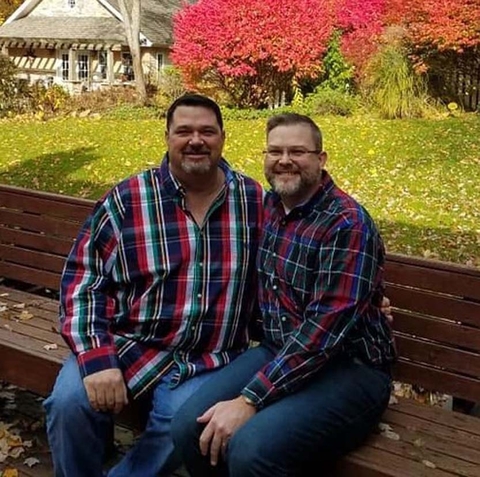 Through scripture, he found he could be gay and Christian.

by Rev. Dr. Shawn Key, Au.D.
Special to The Gayly

I can remember being called “gay” and other slurs before I even know what those terms meant. Once I realized that I was attracted to other guys, I did everything possible to avoid being gay or having the appearance of being effeminate.

I was raised Southern Baptist. I understood God to be loving, yet at the same time, a vengeful God, who would send a person to Hell if they went against scripture. I believed that the scripture clearly said in Leviticus 18:22, “Thou shalt not lie with mankind, as with womankind: it is an abomination.”

I prayed, begged, and pleaded with God to “take this cup from me.” I didn’t want to be gay. During my Junior year in high school, the pastor of our church preached a sermon against homosexuals. I left the church before I could be “found out,” which I was sure was just a matter of time.

I thought I wouldn’t be discovered as gay in a larger church; but, when you are trying to hide from the world, it can quickly become a very lonely place.

Being alone, I went into a depression. I asked God why He would create me to send me to Hell?  I attempted suicide twice. But, when I didn’t succeed, I decided God must have a plan for me, though I didn’t know what it was!

I stopped going to church altogether, once I finally gave in to my instincts and attraction. I didn’t want to be preached into Hell. I couldn’t help who I was. I had tried to end my life before I finally acted on it, without success. Once I felt at peace with being gay, I couldn’t face going back to church.

I still loved God. I still prayed. I felt I could read my Bible at home and be fulfilled, but it became covered in dust, and I missed corporate worship. By that time, I had met, fell in love, and moved in with my husband, Cliffton Cherry. We both felt that God loved us, and we knew that we loved God, but we didn’t have a way to worship Him.

I was scared to open my Bible, afraid that I would come across some new form of condemnation, saying I didn’t count, I couldn’t love, and I wouldn’t be accepted by Him. We tried to go to “important” church services, like on Easter Sunday, but neither of us felt fulfilled.

After receiving my clinical doctorate in Audiology, we were living in Odessa, TX, in 2006, when we were invited to church by a friend of Cliffton, who is a lesbian pastor. I was willing to go to one service to receive my “annual dose” of God.

We arrived at church the next morning, and instead of a customary service, they had bible study in the morning and evening worship service. I enjoyed the bible study, but I didn’t get what I expected, so we went back that evening. Well, we kept returning, every Sunday, because not only did we feel God in that place, but I learned to read my bible again, without fear!

I remember asking God, “Lord, why would You bring me back into the church, if You are just going to send me to Hell, anyway?” I heard the audible voice, “Read Acts,” and I knew it was the voice of God. When I got to Acts 13:39, “Through Him everyone who believes is set free from every sin, a justification you were not able to obtain under the law of Moses” (NIV).

I recognized this as the answer I had long sought after. God’s Word showed me I could be gay and Christian. And, I believed the scripture, “All who call upon the name of the Lord shall be saved” I started reading with a new spiritual fervor. I wasn’t afraid of what it said, knowing God would give me insight and understanding.

In February 2007, at a Reconciling Pentecostals International (RPI) Conference in Fort Worth, Texas, Joseph Adam Pearson taught that the Levitical references in Chapter 18, and 1 Kings 14:24 have one thing in common in ancient Hebrew texts. They refer to the word “qadeshim,” which are “the male temple cult prostitutes who served as religious functionaries in the worship of both male and female fertility pagan gods and goddesses.”

Likewise, the Greek “arsenokoitai” in 1 Corinthians 6:9 was a slang term coined by the apostle Paul, which directly translates “male bed or couch.” I learned that the only accurate translation for the word “homosexual” or “effeminate” in the Bible is “cult temple prostitute.”

In Leviticus, the verse directly before man should not lie with a man as he does with a woman is a command for people not to sacrifice children to Molech. I then understood the abomination – using sex as an act of spiritual worship to another god. According to the original text, therefore, the scriptures are “not referring to homosexuals joined in holy union (now marriage), but people who were involved in idolatrous, prostitutional sexual activity.”

I continued to grow and mature in Christ. Many pastors and evangelists had told me from 2006 until 2009 that I had a calling on my life to preach, but during a church service in 2009, I heard God say, “I have been calling you,” and I finally understood the purpose and calling on my life.

I became the lay minister for my church, and I completed my educational requirements and received my license through RPI. In 2014, Cliffton and I moved to Bella Vista, AR, and we opened Faith, Hope & Love Fellowship Church.

The Holy Scriptures tell us that by our faith in Christ Jesus, we are children belonging to God, there is neither male nor female, for we are all one in Christ Jesus. God desires a relationship with us all, including LGBTQ+. It is our faith that justifies us in all things before God, and I have learned, if you have a problem with that, take it up with Him!

We continue to hold services in our home, as we raise funds for a larger venue to meet, and we broadcast the service live each Sunday from our church Facebook page.

Every service has been recorded and posted on our YouTube page and our church website, at fhandlchurch.com. We are a small but diverse group of believers, and we welcome you to join us at 2 p.m. Sundays, at 3 Reeves Lane, in Bella Vista, AR.