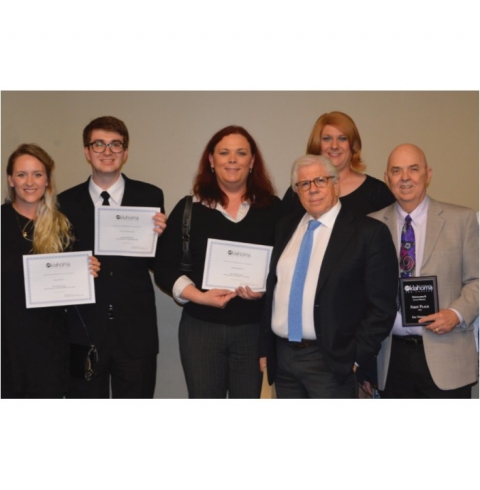 On Saturday, April 30, six journalists for The Gayly won seven awards for their work at the SPJ Awards, hosted by the Society of Professional Journalists – Oklahoma Professional Chapter.

Carl Bernstein, one of two esteemed journalists who broke open the Watergate scandal, was keynote speaker for the ceremony. The leading topic of his discussion: “What is news?” In his words, journalists are to express “the best obtainable version of the truth.” That is what he did the day he finished his article exposing President Richard Nixon and Attorney General John Mitchell for their ‘dirty tricks’ with the Democratic National Committee in 1973.

During Bernstein’s speech, he dropped his notes. He dropped his entire speech, actually; accompanied by laughter from both him and the audience, as he tried to piece it together with un-numbered pages. He was greatly successful.

Bernstein held high hopes for The Gayly. After his shuffled speech, he came to The Gayly table to sit amongst our writers, friends and significant others.

“I didn’t know there was an LGBT paper based in Oklahoma,” he said. The table of award-winners were speechless, but mustered up the appropriate response.

“We distribute to five states, actually. We are the only LGBT news source in this region.”

Bernstein was both enthralled and inquisitive, discussing his son’s role in transgender rights, and then going on to explain his family dynamic with the table. The Gayly staff was left with the overwhelming impression that we had just made a friend.

All in all, we celebrated a great win: A surprise friendship with an infamous writer and a series of well-deserved accolades for our work.

Thank you, dear readers, for your faithfulness to The Gayly. We could not have achieved these successes without each of you.