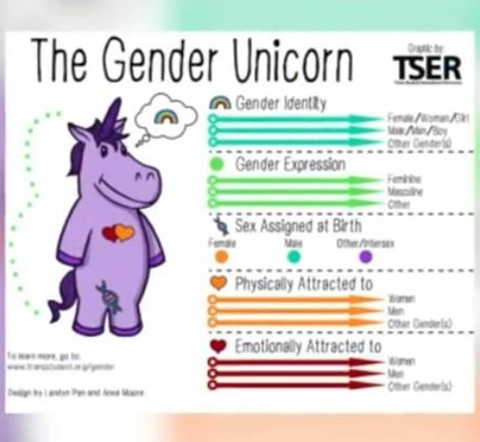 School administrators and families are dealing with a controversy surrounding a graphic called "The Unicorn Graphic." KTXL photo.

Denair Middle School administrators and families are dealing with a controversy surrounding a graphic called "The Unicorn Graphic."

“I’ve talked to a lot of parents and a lot of grandparents and I know a lot of them have called the school and complained about it," grandmother Tammy Stout said.

The graphic -- which can be found on the website for Trans Student Educational Resources -- is meant to educate people about gender identity.

It was distributed to roughly 50 students this week by a science teacher on the first day of the school year.

"It was not an assignment kids were not asked to fill it out he really was using it as a reference point," Denair Unified School District Superintendent Terry Metzger.

Metzger said the seventh and eighth grade science teacher handed out copies of the infographic to help explain why the teacher doesn’t use the pronoun mister, instead using "Mx" pronounced mixed.

A title which doesn’t imply a gender.

Metzger said the school’s principal happened to be in the class at the time and told the teacher to stop handing out copies of The Gender Unicorn.

"Probably was not appropriate just in the way that the handout looked and it looked like it needed to be filled out and so it was just probably the wrong tool," Metzger said.

“It is a touchy subject and of course it’s going to be when it comes to youth," Katalina Zombrano explained.

Zombrano, the gender spectrum coordinator for the Central Valley Pride Center, said she uses The Gender Unicorn graphic for educational purposes for her job.

Adding that while she said the point is not to pry at someones sexuality, she does feel that a break down in communication is the real culprit in the case at Denair Middle School.

"There is going to be a lot of people who just don’t get it we understand that we respect that," Zombrano said. "But, maybe a little more planning next time a little bit more finesse."

As for the repercussions for this teacher for not clearing this graphic with administrators first, the school said any disciplinary action taken against the teacher will be kept private.