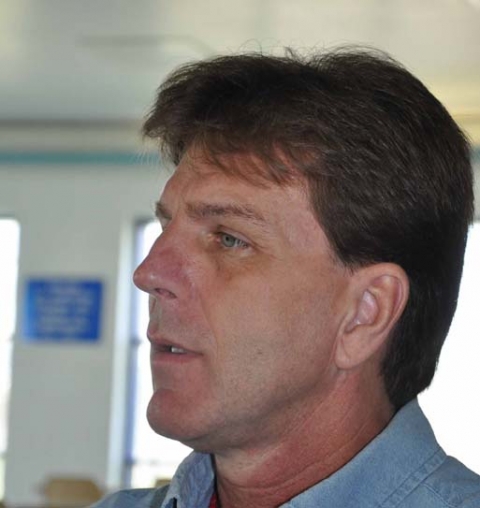 Jay Wesley Neill was executed on December 12th, 2002 for his part the bank robbery that left four people dead in 1983 in Geronimo, OK. On appeal, Robert Grady Johnson had been granted a new trial in 1993, separate from the original trial which left him on death row with Neill.

For the second trial, Grady retained the services of Oklahoma City defense attorney Mark Henricksen and Hugo attorney Don Ed Payne. The Gayly spoke with Mark Henricksen recently regarding his experience at that trial.

One interesting story told by Henricksen was regarding finding the prosecutor eavesdropping on the jury deliberations. “The jury room was just off the courtroom,” explained Henricksen. “Apparently, this was some kind of unofficial custom in Comanche County. So I went over and listened, too. The judge, Jack Brach came by and saw us listening and told us, ‘I don’t mind you listening, just don’t tell the press what you hear.’”

During the trial, one claim by the prosecutor, Robert Schulte, was that Johnson was at the bank with Jay Neill during the robbery and murders. They produced a witness, Herman Williams, who was incarcerated with Johnson at Joseph Harp Correctional Center. Williams testified that Johnson approached him and told him he was involved in the Geronimo bank robbery. He stated Johnson told him he “was grossed out by all the blood and went out and waited in the car.”

His testimony would have been hard for any impartial juror to believe. Williams admitted he knew the District Attorney had previously requested leniency for him from the State Pardon and Parole Board. He was currently serving a 75-year sentence for drug dealing and two ten-year sentences for perjury.

However, Johnson’s next door neighbor, Debbie Ward, told the jury in the first trial that Johnson was with her at her apartment until a couple of minutes after 1pm. Henricksen told The Gayly, “We hired an expert who mounted a dashboard camera and drove quickly to the bank.” Henricksen went on to say, “We found it was impossible to reach the bank from the apartment in time to get to the bank to participate in the robbery.”

The only other witness to testify that Johnson was at the bank was victim Marilyn Roach. She testified that she heard two men speaking after she was shot. According to her testimony, one of the men spoke and said, “I thought you said you weren’t going to shoot anyone?” To which the other replied, “Well, they moved.”

Henricksen said he recalled in her testimony, “She said Jesus had come to her while she was unconscious and told her he would not let them kill her,” inferring there were two bank robbers. However, Roach was unconscious and severely injured at the time from the two gunshot wounds to her head. No other surviving witness heard this or saw anyone other than Jay Neill at the bank. Even Neill testified at his second trial that Johnson was not at the bank.

The bank had no cameras and the prosecution could come up with no physical evidence that Johnson was at the bank. A few months earlier during Jay Neill’s trial, prosecutor Shulte acknowledged Neill’s testimony that Johnson was not at the bank when Schulte told the jury, “So he just kissed Johnson lightly, told Johnson to wish him luck and left for the bank.”  However, in Johnson’s trial Schulte tells the jury that both Neill and Johnson entered the bank at 1:15pm the day of the robbery.

“They ended up finding him [Grady] guilty of all counts and then recessed for the weekend before returning for deliberations as to his sentence,” adds Henricksen. “The FBI tells the prosecutor a witness has told them the jury foreperson said they were not going to give the death penalty to that boy. So without hearing the foreperson’s side, the prosecutor sought to have her removed from the jury.

“We threw a fit and put it on record that it was because we were listening at the jury door and the DA and the court were involved in jury tampering (using information overheard). The judge overruled it and she was removed from the jury. Fortunately, it had little effect and the jury returned a sentence of life without parole instead of death.”

In 1993 the atmosphere in Comanche County was still highly charged with hostility toward Johnson and Neill. “They baited us to apply for a change of venue, but we were afraid they would send us someplace like Walters which would have been a smaller, more conservative place to try the case, “said Henricksen. “So we made a strategic decision to stay in Lawton.

“They didn’t like Don and me in Lawton either. One afternoon when court had recessed for the day we stopped by a supermarket to pick up a snack to take back to the hotel. When we got to the checkout there was a lady ahead of us with a fully loaded basket. The cashier asked her if she wouldn’t mind letting us go ahead of her since we had only a couple of items. “No,” she said. “I know who they are and I don’t approve.”

“I really wanted to ask her what it was that met with her disapproval, a fair trial or the concept of innocent until proven guilty,” Henriksen said sharply. “Then, in the early hours of the morning, Don received a phone call with the caller stating, ‘if that fag goes free, you’ll never leave this town alive.’”

Next month:  The conclusion of this series. How Robert Grady Johnson spends his time in prison. Some disturbing questions about how the law was applied in this case. What is the origin of the subtle inconsistencies in evidence that were reviewed by the various appellate courts?