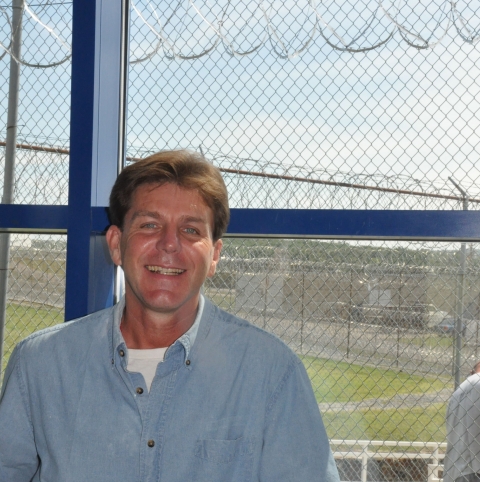 Walking through the gates of Mack Alford Correctional Center in Stringtown, OK for the first time is a little intimidating. Every scene from every prison movie I’ve ever seen starts crowding into my mind and viewing the security gates and razor wire we are going through to get inside, I’m hoping the unpaid parking ticket from my college days doesn’t show up on any record. After all, we’re just journalists here for an interview, right?

It’s a bright hot August afternoon and Deputy Warden Tommy Sharp greets us in the front administration building. He guides us out the back door and up to a secured gate with a double security fence topped with razor wire and rolls of razor wire stacked in between the fences. From there, we enter into a secured building where we undergo a search of our personal items and walk through a metal detector, pretty much like airport security. We’re then escorted to a room where prisoners and families are allowed to meet. However, in this instance the room is vacant.

We are here to interview a man convicted of participating in one of Oklahoma’s most notorious and bloody bank robberies of the latter 20th century.

But before we get to the interview let’s go back to the beginning of our involvement in this story. We started sending a subscription of The Gayly to Robbie (Robert Grady) Johnson at Mack Alford Correctional Center about a year-and-a-half ago at the request of his sister, Rhonda Johnson. She called, paid the fee and we set up the subscription. We had no idea of the crime or the reason her brother was in prison. All we knew was that he was gay and liked The Gayly.

Near the end of 2012, we wrote a note to Johnson summarizing what we had covered that year, the progress of gay rights and wished him a nice holiday. That was that – or so we thought.

In January, 2013, we received a letter from Johnson explaining some of what his side of the story was…mainly that he was 16 miles away when the crime occurred.

Soon another letter arrived, then another and another. Johnson started explaining the crime, the trial and imprisonment from his prospective. His statement in the first letter was that a juror said, “We should die simply for being gay,” referring to Robbie and his accomplice and boyfriend, Jay Wesley Neill.

This was the early 80s in mostly rural Comanche County Oklahoma and things were a lot different. Add to this the brutality of the crime in a very small town, and emotions were at a fever pitch. This crime not only shocked the close-knit community of Geronimo, with a population just under 1300 people, but the state and nation.

THE CRIME: On a bleak, rainy Friday, December 14, 1984 just after 1pm, a man armed with two knives and a .32 caliber pistol walks into the First Bank of Chattanooga in Geronimo, Oklahoma. Swiftly, he herds the three tellers into a back room of the bank and forces them to lay face down on the floor. There he begins to brutally stab the victims a total of 75 times, cuts their throats, and in the process almost decapitates one of them. The victims were Kay Bruno, 42; Jerri Bowles, 19; and Joyce Mullinex, 25. Mullinex was six months pregnant.

About that time, 15 year old Bellen Robles enters the bank and sees a man bent over stabbing someone in the back room. She immediately runs out to tell her husband, Rueben Robles, 20, that she thinks the bank is being robbed. Not believing it could be happening in Geronimo, Robles, carrying their 14 month old daughter, Marie, follows his wife back into the bank. Also at this time, another customer, Ralph Zeller, 33, enters the bank and behind him, a woman, Marilyn Roach, 24. The suspect confronts them and herds them to the back room as well, forcing them to lie face down. Then he shoots each of them in the head, except the 14 month old girl. When he gets to her, he pulls the trigger, but he’s out of bullets.

Taking almost $17,000, he flees the bank, not realizing he is leaving three witnesses alive. Both Bellen and Rueben Robles, and Roach will recover from their wounds. Ralph Zeller is not so lucky.

Three days later, on December 17, 1984 Robert Grady Johnson and Jay Wesley Neill are arrested in their hotel room in San Francisco. They are returned to the District Court of Comanche County, Oklahoma and charged with four counts of first degree murder, three counts of shooting with intent to kill and one count of attempted shooting with intent to kill. The Federal bank robbery charges are waived, so the state could prosecute the murder charges. They are tried and convicted together in May, 1985.

The jury recommends death sentences for Johnson and Neill on each of the murder counts. They are both sent to death row at the Oklahoma State Penitentiary in McAlester, OK.

Later, on direct appeal, the Oklahoma Court of Criminal Appeals (OCCA) reverses the convictions and sentences and remands the cases for new trials, concluding that Johnson and Neill were improperly tried together because Johnson's and Neill's defenses were mutually antagonistic; each defendant asserted the other was solely responsible for commission of the offenses. (Neill v. State, 827 P.2d 884, 887-88 (Okla.Crim.App. 1992)).

In 1993, Johnson is separately retried and convicted of the same eight crimes. He is not considered to be present at the robbery, but is convicted under the Felony Murder statute which reads if you play a part in the crime and someone is murdered, it’s the same as if you committed the murder. He is sentenced to four life sentences on the murder counts, three twenty-year sentences on the shooting with intent to kill counts, and a ten-year sentence on the attempted shooting count, with all sentences to be served consecutively. The trial court enters judgment on July 28, 1993.

Neill, considered the only one actually at the bank that day and the sole person who committed the robbery and murder, receives the death penalty, again. On December 12, 2002 at 6:15pm Jay Wesley Neill is executed by lethal injection at the Oklahoma State Penitentiary in McAllister, Oklahoma.

Now we’re completely alone in this empty room waiting to interview one of the people convicted of this horrific crime now 51 years old and in prison for 29 years. As we’re setting up our cameras and recorders, we’re not quite sure what to expect.

Then a guard opens the door and in walks a man who looks much younger than his age, dressed in a blue cotton DOC issued shirt and blue jeans. We’re greeted with a warm smile, hugs and handshakes. This is the real Robbie Grady Johnson.

Next month we will continue into part two: We’ll get to know the real Robbie Grady Johnson with some remarks from Rhonda Johnson, his sister and well-known Oklahoma City Attorney Mark Henricksen who worked on Johnson’s second case.

Copyright 2013 The Gayly. All rights reserved. This material may not be published, broadcast, rewritten or redistributed.