Get your history straight 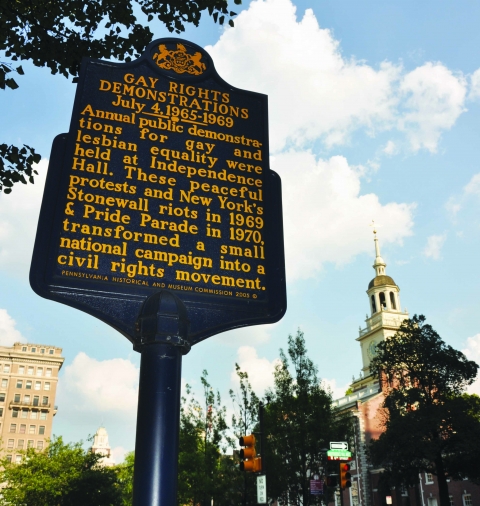 The rest of your life is up to you!

Happy 239th, America! This month, we remember the history of our nation. However, here is a history lesson perhaps only few of us know about; the LGBT Civil Rights movement which took place in Philadelphia, PA beginning 50 (+) years ago.

According to “Gay Pioneers,” in July 4, 1965, forty (40) people carried signs in front of Philadelphia’s Independence Hall supporting gay emancipation. Each year across the east coast, from New York to DC and Philadelphia, their numbers grew. By July 4, 1969, one month after Stonewall one hundred and fifty (150) people demonstrated at Independence Hall.

The annual demonstrations were consolidated in 1970 to mark the first anniversary of the Stonewall Riots. That led to the then largest gathering for gays and lesbians when between two to five thousand people congregated in New York’s Central Park.

History which we are more familiar with is these 1970 demonstrations encouraged activists to stage the first gay pride parade in NYC. As time went on, the New York Pride Parade was emulated in large and small cities in North America and worldwide and helped catapult an international civil rights movement.

Mark Segal of the Philadelphia Gay News wrote in a recent article “Birth of a nation and LGBT rights” about the national spotlight on this 50th anniversary of the first LGBT demonstrations in front of Independence Hall that took place originally July 4, 1965, but went on through 1969.

Segal wrote, “While it was a pivotal change in the struggle for equality, some are revising our history out of context by stating it is the 50th anniversary of the LGBT movement. That simply is not true.

“As the coordinator of the National LGBT History Project along with many of the nation’s local LGBT media, we need to ensure that our community’s history struggle be preserved, not revised. Likewise, many LGBT historians are beginning to speak up.”

Segal, in a chat with William Kelly, (who was one of those marchers outside Independence Hall), reminds people of the earlier struggle. Kelly said, “Frank Kameny and associates formed the Mattachine Society of Washington, an independent organization, in 1961. Harry Hay and others formed the original Mattachine group even earlier, in 1950. ONE, Inc., got its start in the 1950s and successfully took a case to the Supreme Court while producing a pioneer newsstand-distributed periodical, One.

“Daughters of Bilitis was formed in 1955. San Francisco’s SIR was quite active already in 1965 when I first got involved in the movement. Lisa Ben was putting out Vice Versa in carbon-copy form in the late 1940s. And, of course, granddaddy of them all though extremely short-lived, Chicago’s Society for Human Rights was around in 1924.”

Kelly continues, “Also, there were street protests in Los Angeles and San Francisco prior to 1965, and in 1964, Randy Wicker organized a picket of the Whitehall Street military induction. These institutions and events had different flavors, but they all qualify as parts of a movement, even though an evolving one. A movement doesn’t consist of street demonstrations only.”

Another way to judge our struggle is from recent court cases, our plight for marriage equality, the rage of anti-gay activists when our basic rights are granted and what the public knew or saw about our community before Stonewall; when our community was transferred from a mild-mannered, polite one to an “Out and Proud” in-your-face struggle.

This July 4th marks the 50th anniversary of the march in Philadelphia. For more information, visit www.lgbt50th.org.