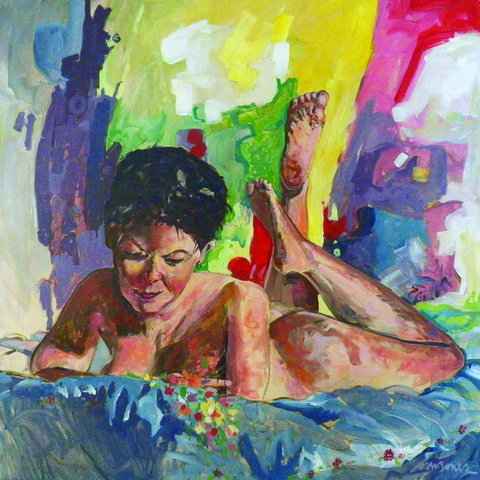 The detailed art of Micheal Jones in “Flora.” Photo provided.

In September, Oklahomans for Equality welcomes the work of Micheal Jones in a show titled, Gods and Fools. This work will be the featured local artist exhibit of local artists at the Dennis R. Neill Equality Center.

The month-long event begins with a reception on Thursday, September 6 from 6-9 p.m. and continues throughout the month.

Since the age of 12, Micheal Jones has been an artist.

In school, he was “the guy who spent his extra time in the library studying the Renaissance.” This description sums Micheal’s life up in a nutshell.

By the age of 16, Micheal had sold his first painting and within a few years, was hanging one-person shows in every available venue, from banks and museums to community buildings.

Micheal earned his Master’s Degree and began exhibiting in well-known juried national shows from Los Angeles to New York. He and has a set of his mezzotints in the State Museum of Yekaterinburg, Russia.

Gods and Fools is a portfolio of works depicting ancient personalities in modern-day settings.

By combining this theatrical dynamism with a careful observation from life, Caravaggio achieved a gritty naturalism in both genre and religious scenes.

Conversely, Micheal has chosen to portray his figures using his contemporary Impressionistic style, which further emphasizes the fact that these figures are firmly entrenched in the modern era.

His models often stare directly at the viewer and include mundane details often found in modern life.

For example, he created Hades, balefully staring directly into the viewer’s eye, smoking a cigarette and subtly giving the world the finger. Bacchus totters in the same swing, beer in hand and St Francis dutifully cares for his birds with books, cigarettes and Rolaids close by his side.

Aeolus again looks into your soul, his wind is smoke, and an image of Big Bird hangs eerily below his crotch.

Other nuances abound throughout the collection, enticing the viewer to stop and study each piece, finding more and more details. These paintings are large-scale, and each one will control the room in which it hangs.

Micheal continues to produce his best work in his studio in Broken Arrow, Oklahoma, where he lives with his wife of 45 years

The show begins with a reception on Thursday, September 6, from 6-9 p.m. at the Dennis R. Neill Equality Center, located at 621 E. 4th Street in Downtown Tulsa. There will be a door prize drawn from the artist’s work. The show continues throughout September.