Group gearing up for approval of medical marijuana in Oklahoma 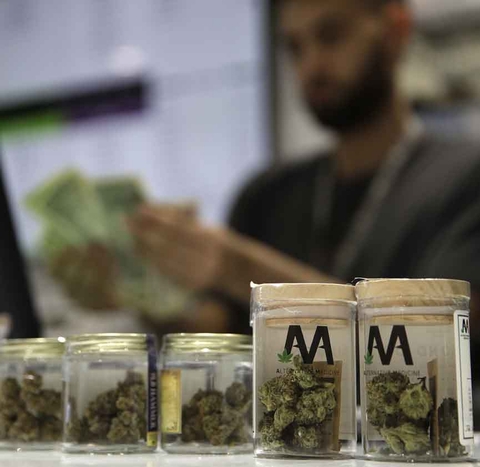 A cashier rings up a marijuana sale at a cannabis dispensary in Nevada where it is legal. AP Photo, John Locher.

“The way we wrote SQ 788, it would be the same as if the legislature wrote the law in session and put it to a vote of the people,” says Chip Paul, co-founder of Oklahomans for Health, which circulated the petition that will place legal medical marijuana on the Oklahoma ballot in November 2018.

“If it’s a yes vote, the legislature is stuck with implementing it.”

Recognizing that, the legislature has initiated a study committee headed by state Rep. John Paul (JP) Jordan to determine what steps the state must take if SQ 788 passes. “The most exciting thing happening now is that we are going to participate in the interim study,” Paul told The Gayly.

The study will examine many issues, including:

• What policies and procedures need to be put in place?

• What is the best regulatory system?

• Does the Oklahoma Legislature need to put some of these provisions in place prior to the passage of SQ788?

“The study is not to debate the merits of SQ 788 as that will be decided by the voters. Its main job is to determine what action (if any) is needed prior to the vote,” according to Rep. Jordan’s proposal for the study.

“We may very well end up working directly with the legislature to smooth the way for a yes vote and get it implemented,” Paul said. He hopes the study will consider many issues. “We decriminalize everything [applying to marijuana]. You’ve got people in jail who would be medical patients under our law. That needs to be addressed in a big way.”

The vote is still 15 months away, unless Gov. Mary Fallin sets an earlier date for a special election. But Oklahomans for Health is already gearing up for the campaign. They have reconstituted their board by adding a few new board members and are hoping to have a big fundraiser in Oklahoma City in the fall.

In 2018, the group will be doing a lot of education and determining which politicians will support the legalization of medical marijuana. Those who support the measure will be asked to sign a pledge, to hold them accountable for the promises they make.

“The governor race is very interesting. We are meeting with all the candidates to see where they stand on the issue.” Former state Senator Connie Johnson has already announced her candidacy and is a strong supporter of SQ 788.

The legislation proposed in SQ 788 is among the broadest in the country. Unlike many other states, the proposal does not narrowly define the medical conditions that would qualify patients for medical pot. Paul said the requirement is for a physician to certify that the patient has a medical condition for which cannabis is appropriate – yes or no.

“It [the proposed law] puts the burden on the physician to learn about the use of cannabis. That needs to be explained.”

The organization is in touch with many of the advocates of marijuana law reform, including NORML (National Organization for the Reform of Marijuana Laws).

“We’ll probably take advice from NORML,” explains Paul. “They are extremely interested in our law because it is so progressive. It’s a win win win. For the state, it’s easy to implement. For the patient, there’s no restriction for medical condition. For business, this is going to be one of the best places to grow cannabis in the world.” Paul says Oklahoma’s climate makes it an ideal place to cultivate cannabis, and their proposal outlines permitting for growers.

“When the federal laws fall we’ll be able to do interstate commerce. We’ve tried to hit a home run with what we’ve done. I think our law will be a model.”

Paul believes it is possible that the federal government will give up on prohibiting marijuana for medical purposes, although he admits that there are hurdles to that. The main one is that if you make medical claims for an herbal substance, you have to do tests on it and get approved by the FDA.

He is encouraged by both local and national polling on the topic. In a 2015 poll of conservative voters over 50, “about the most conservative demographic you can get,” 62 percent were favorable on medical pot.