Growing up intersex in a brown body 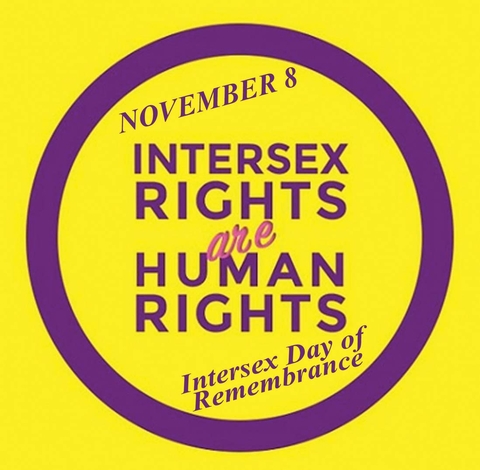 When I found out November 8th was Intersex Day of Remembrance, also known as Intersex Solidarity Day, I scanned my brain to see if I knew of any black or brown intersex people.

I remembered I grew up with an intersex person, a black girl when I was in elementary school. I had a class with her in 5th grade, and she was feminine presenting. I always thought she was a girl until rumors spread that she was a boy pretending to be a girl.

I did not understand the rumors at first, but then her cousin told me that she was both boy and girl. I guess that translated to the other kids as her being a boy trying to be a girl. I asked her cousin more about what it all meant, and he said that she had a pee-pee (boy part) and a peach (girl part). I thought that it was unique, but it did not change my view of her because she was a very nice girl. I played with her on the playground when a lot of people would not.

One Sunday, her family came to my church, and after service, we had dinner at the church, so being the inquisitive little girl that I was (and still am), I asked her mom if she really had both parts. Her mom said yes and explained to me that she allowed her to choose what gender she wanted to be and that it may change later on and that she was fine with that.

I also remember adult members of the church gossiping about my intersex friend, and they were not nice. I have found that church people can be some of the cruelest people. Anyway, they were saying that she came out that way because the parents were sinning and that God punishes people for living in sin. I think her parents were not married when they had her. We all know that is bull crap. It is a genetic variation just like people who are born with extra fingers.

Although Intersex Day of Remembrance is widely celebrated mostly in Europe, the United States needs to step up its awareness of this day and celebrate it. I feel like people in this country think that it is a very rare thing to be intersex, but it is not. According to www.intersexequality.com, approximately two percent of the population is intersex which is about the percentage of the population with red hair.

The reason we need to have more awareness is so that we can properly advocate for the rights of intersex people. Many experts now agree that the intersex child should not have sex assignment surgery while in infancy, yet many parents decided what gender they want their baby to be and permanently alter their genitals for life. The child should later decide for themselves – especially during the hormonal years of puberty.

When my intersex friend and I reached Junior High, she started her menstrual cycle, but it was very light and not monthly. The doctors said that she might not even have very many eggs, and her ovaries were abnormal. She may not be able to have kids due to that.

We lost touch after 9th grade, so I do not know what became of her life. I hope that she is doing well and living the best life that she can without discrimination.

Let us all remember the “I” in LGBTQIA. Intersex people have a place in the community.