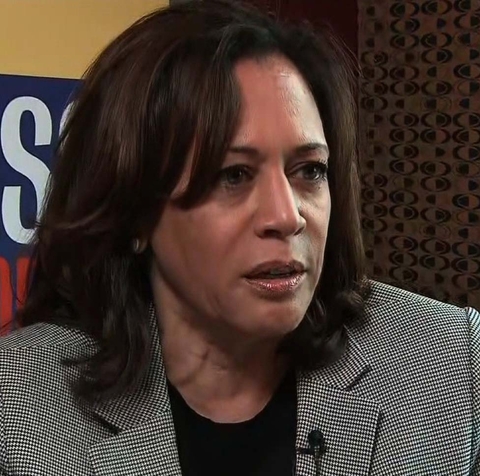 Harris' proposal to expand heath care and housing assistance, posted to Medium just minutes before she took the stage at a forum in New Hampshire with veterans, would apply to more than 500,000 veterans who have received other-than-honorable discharges for misconduct that was linked to post-traumatic stress disorder (PTSD) and traumatic brain injuries (TBI).

"This is for me about seeing the veteran in the complexity of your life. You have done so much for your country and we owe you that we will see you in the full dimension of the life that you live," the California senator said during her event in Manchester, New Hampshire.

Harris — in town for the Granite state's Democratic Party Convention — passionately described how her work as a prosecutor has influenced the way she sees veteran issues.

"I've personally prosecuted homicide cases. I've looked at more autopsy photographs than I care to tell you," she told the silent room. "I have seen more scenes that were the scenes of violent crime than I care to tell you. I have not served in the military, but I have seen acts of some of the worst human behavior enough to know the impact that it has on those who are on the frontlines with boots on the ground."

Harris said the government makes veterans' issues worse by withholding care for those who need it most.

"People with PTSD tend to act out. They tend to self-medicate. Which means they're going to be on drugs or they may be an alcoholic. And then they're going to get into fights and they have a really short fuse. And guess what happens? All of a sudden you don't qualify for VA. That's wrong because again we are not taking into account the way we have designed or enforcing the system the realities of that person's life. It's backwards!" Harris said.

Harris' plan would direct the Department of Defense to review all other-than-honorable discharges for "possible bias."

Harris pointed to a 2017 Government Accountability Office report that found that 62% of service members who were separated for misconduct over a four-year period had been diagnosed two years prior to their separation with PTSD, TBI or other conditions — and about a quarter of them received less-than-honorable discharges, making them possibly ineligible for VA benefits.

The review would also include checking for service members who are sexual assault survivors and aim to ensure that these veterans aren't being "inadvertently discharged with bad paper that relates to being a victim of sexual assault or sexual harassment in the ranks."

Her proposal would create a grant that would provide communities with resources to help get veterans, with VA benefits or not, placed in transitional housing.

Another prong of her plan is to expand access to enlisting in the military by rescinding the Trump administration's policy banning transgender recruits from joining the military and relaunching a program aimed at recruiting immigrants, including refugees and undocumented immigrants who received Obama-era protections under the Deferred Action for Childhood Arrivals policy.

Drawing on her time as California attorney general, Harris also promises to make sure veterans and their families are "less vulnerable to scams."

Her plan would devote more resources to Consumer Financial Protection Bureau and the Department of Justice to target scammers, fight for-profit schools and colleges, and direct the Justice Department to create an interagency task force to enforce consumer protection.

Seventy-year-old Army vet Scott Caplain, who trekked to New Hampshire from Fall Rivers, Massachusetts, said although Harris is too liberal for his liking, he approves of her latest plan.

"Today, her veterans plan is right on the mark, she has a deep respect for veterans," Caplain, who said he has not decided who he's going to vote for, told CNN. "I'm against privatizing the VA, I think it's the responsibility of the government."