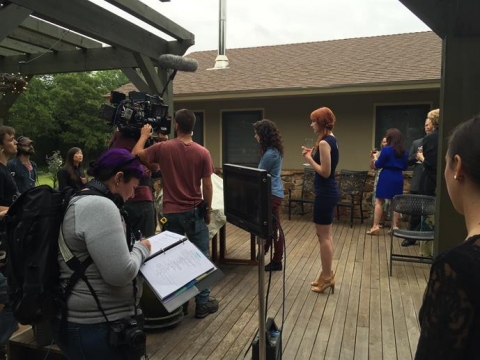 The cast of Heartland, including screenwriter, star, and producer Velinda Godfrey (blue shirt center) and Laura Spencer (right center) begin rehearsals for the film on Tuesday, May 19. Photo by Sara Combs/Provided.

“The landscape and the skies of Oklahoma are an important part of the film, and can’t be created in Los Angeles,” said Oklahoma filmmaker Velinda Godfrey, explaining why she is shooting her film, Heartland, in Oklahoma. She added that the crew was in Oklahoma City for the recent tornadoes “so we actually got shots of the churning skies.”

Godfrey is the writer, lead actress, and producer of Heartland, which takes an honest look at the conflicted lives of ordinary people who are forced to question their allegiance to love, and whether tolerance is enough.

Although she now lives in LA, Godfrey is an Oklahoma native, and still has family here. Her co-star, Laura Spencer is from Edmond. Her co-producer lives in Norman, and most of the support staff, including the art, hair and makeup teams are local. She says, “The project would not be possible without coming home to Oklahoma.”

The project is on a tight budget, and friends and family of the stars are putting up the staff that is coming from LA. “We even have high-school friends’ mothers asking how they can help.”

“The script is gorgeous,” says Jeffrey Tambor, who is proud of the fact the film began three years ago in his class, where Godfrey and co-writer Todd Waring began work-shopping it. “Young geniuses,” he calls the filmmakers.

The story is about Lauren, a 26-year-old artist in suburban Oklahoma. She has moved back in with her mom, Crystal, following the sudden death of her girlfriend. The arrangement leads the relentlessly chipper Crystal to believe her daughter is headed back to the straight and narrow. But, Lauren is only following her mom’s traditional plans for her future in order to stave off the pain of the recent tragedy.

When her brother comes home with his uptight fiancée Carrie to help launch a local winery, Lauren, eager for a distraction, becomes energized to complete the artwork for the wine labels. Carrie reluctantly decides to help Lauren with the marketing concept, but the two have fun searching together for images of authentic Oklahoma. As Lauren starts to regain her sense of adventure, and Carrie starts to question her own predictable future, their excitement for the project develops into a passion for each other. And when the two take cover in a bathtub during a tornado, their closeness sparks a sexual affair that can’t remain secret for long.

“This film emulates a reality that we all live in,” says director Maura Anderson. “We will always have stories about ‘coming out,’ but I think it’s important that movies start transcending this to places where central characters just happen to be gay, it isn’t the central theme, it’s just a fact, because this is the world we live in and for those people that don’t live in that reality, film is a great way to see that it can and does exist.”

With plans to shoot in Oklahoma for twenty days on a shoestring budget, the filmmakers have ideas to make every penny stretch. In addition to the housing help from family and friends, Godfrey is particularly thankful for the Oklahoma Film Commission, saying, “We are grateful to the Oklahoma Film Commission, which helped us find the house we are using for filming, and for its film industry incentive which helps to complete our post-production.” The state incentive gives a cash rebate of 35 percent of the dollars spent in Oklahoma.

How does it feel to be back in her home state? “It’s been the most rewarding experience of my life so far. It’s humbling because I’ve been blown away that people I’ve known in my life have come together to help do this project. Even high school friends’ mothers have offered to help. Oklahoma is known for generosity, but the help and support has been terrific.”

The entire film is being shot in Oklahoma between May 20 and June 12. Godfrey isn’t sure when the film will be released, but said “I would love to make it into the deadCenter Film Festival. Nothing is yet planned as far as a premier, but we will do something special so everyone involved here has a chance to see it.”