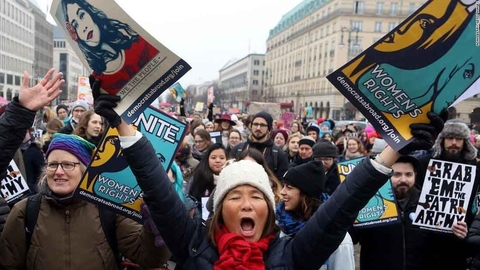 The third year of Women's Marches is expected to bring thousands or protesters to cities all over the US. Adam Berry, Getty Images via CNN.

The third year of Women's Marches is expected to bring thousands of protesters to cities across the US, but during the past few weeks, there's also been controversy over leadership, an evolving agenda and inclusion.

Here's a guide to the events that are (or are not) happening in your city:

Wichita – Saturday, Jan. 19, 1 p.m. March starts at Keeper of the Plains, moves down Central Avenue toward City Hall, where a rally is planned.

Women's Marches across the country

Although accusations of anti-Semitism have been lobbied against the leadership of the D.C. organizers, Women's March, Inc., Chief Operating Officer Rachel Carmona told CNN the organization rejects anti-Semitism and is committed to making this year's march one of growth.

"No one comes to this work knowing everything; we all have learning to do, and we are deeply grateful for our Jewish network members and Jewish partners engaging in that work with us," Carmona said.

From Pershing Square to City Hall, Angelenos will be participating in a march beginning at 10 a.m. and ending at 2 p.m.

"This is an inclusive, non-partisan march, and everyone who supports women's rights is welcome," Women's March Los Angeles Foundation said.

Women's March Alliance is hosting a New York City march for the third year. Instead of a rally, this event will have a "kick-off" before the march at 11:00 a.m. at 62nd Street and Central Park West. The parade route will run along Central Park.

"Women's March, Inc. has asked us to provide them with our permits so they can help put their message on our platform. But we support New York, we are the voices of New York and we're very serious about making sure New York is represented, not D.C.," the organization told CNN.

Rain or shine, the organization said, the Saturday rally will begin at 11:30 a.m. at the Civic Center Plaza, with a march to follow down Market Street to the Embarcadero.

This year's theme is #TruthToPower.

Seattle will host a whole weekend of activities put on by Womxn's March on Seattle. It all begins Saturday with a rally and march held at Cal Anderson Park at 9 a.m. The march will end at Seattle Center, where participants can attend activism workshops, the organization said.

Sunday will be a "day of action," Womxn's March on Seattle said, including "workshops, lectures, trainings, small groups, panel discussions and community-building events."

The Boston Common will be the meeting point for March Forward Massachusetts' 2019 Boston Women's March.

The event will run from 10 a.m. to 2 p.m. and will feature Yael Deckelbaum, Israeli/Canadian singer-songwriter and activist, as a headlining performer.

March Forward Massachusetts asked participants on their event page to wear red to the event to show "support to Indigenous communities here and throughout the Americas experiencing an ongoing epidemic of violence against women."

Where it's not happening -- but there are alternatives

These cities have held marches in the past two years, but this year they've either not had one scheduled or they've announced cancellations. And some say it's because of the Women's March, Inc. controversy.

"The Austin Women's Rally" is taking the place of a march this year. March On Texas announced on Facebook on Sunday that the rally, annually held on the anniversary of the Roe v. Wade decision, will take place without a march associated. The group cited organizational and funding challenges.

The rally will be held at the Texas State Capitol from 2 p.m. to 5 p.m.

Instead of a march, Women's March Chicago has launched the initiative, "Operation Activation," which encourages people to organize their own events.

The organization held an event during the November midterms called "March to the Polls" that drew an estimated 100,000 people. Organizers say the cost of that event depleted their resources.

The National Organization for Women- Baton Rouge Chapter has canceled the New Orleans march, citing the controversy over the leadership of Women's March, Inc.

"The controversy is dampening efforts of sister marches to fundraise, enlist involvement, find sponsors and attendee numbers have drastically declined this year," the Facebook statement read. "New Orleans is no exception."

The group says they hope to "re-organize and re-evaluate" going forward.

Women's March on Washington-Ohio Chapter announced on Facebook that it has canceled the Cincinnati Women's March, citing an inability to confirm a location or secure event insurance.

The group also acknowledged obstacles to making the event feel inclusive, both in the event's history and due to recent controversy.

"With issues of exclusion of women of color in the past two Cincinnati marches to the concerns about antisemitism on the national level, many women and femmes are experiencing hurt, anger and distrust of one another," the statement on Facebook said. "Over the course of the next year we hope to provide opportunities to explore those sentiments, to learn from each other and to hopefully bridge the divide."

"March on to 2020" might be misleading. The organization March On Georgia is holding an event in Atlanta, but organizers are calling it a rally -- not a march.

Beginning at noon, the rally at KIPP Strive Academy will feature food trucks, a "kid-friendly" environment, speeches by activists and female lawmakers, a photo exhibit of Atlanta and the Civil Rights Movement and charity opportunities.

Why no march this year? Janel Green, executive director of the Georgia Alliance for Social Justice, said it was not due to controversy. It was out of respect for civil rights leader Martin Luther King Jr.

"We said from the beginning that we did not feel it was appropriate to plan it the same weekend as MLK march," Green told CNN.