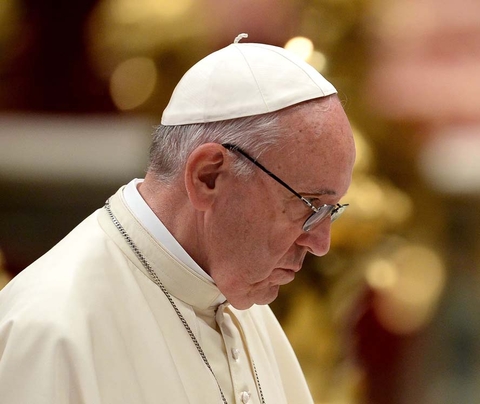 A group representing LGBTQ+ rights met in a high-level meeting Friday at the Vatican to ask for Pope Francis' support for the decriminalization of homosexuality.

Approximately 50 international representatives traveled to Rome to share with the Pope their preliminary research on human rights violations in the Caribbean, where the groups did research on LGBTQ+ rights in 10 jurisdictions.

The group was met by the Vatican's secretary of state, Cardinal Pietro Parolin, who said he would pass on the information to Pope Francis, according to the Vatican's spokesman.

In a statement following the meeting, the group said that they called on the Catholic Church to "work for the decriminalization of homosexuality and for the abolition of all forms of punishment for consented intimate sexual acts between adults."

In addition, the group asked the Catholic Church to "call upon all states to declare illegal the application of the so-called conversion 'cure' therapies."

The Vatican meeting came amid an international outcry over new laws in Brunei that will punish adultery and homosexual sex with death.

In 2008, the Vatican restated its opposition to discrimination against homosexuals, as stated in the Catechism of the Catholic Church.

"The well-known principles of respect for the fundamental right of the person and the rejection of all unjust discrimination -- recognized clearly by the Catechism of the Catholic Church itself -- evidently exclude not only the death penalty, but all violent or discriminatory penal legislations in relation to homosexuals," a Vatican spokesman said at the time.

"I repeat what the Catechism of the Catholic Church says: that they must not be discriminated against, that they must be respected and accompanied pastorally," Francis said at a press conference aboard the papal plane.

"The Church must ask forgiveness for not behaving many times -- when I say the Church, I mean Christians! The Church is holy, we are sinners!"

Those comments followed Francis 2013 question -- Who am I to judge gay people? -- which were hailed as a breakthrough for a church that has historically condemned homosexuality, often in harsh terms.

Francis has not changed church doctrine that calls homosexual acts sinful, but he has shown a more merciful approach to people on the margins, including gays and lesbians.

The group representing LGBTQ+ rights have asked the Vatican to "issue a public statement in which the official policy of the Holy See is clarified."

According to the group, the meeting was originally scheduled with Pope Francis but changed at the last minute. The Vatican did not respond to a request for clarification on the change.