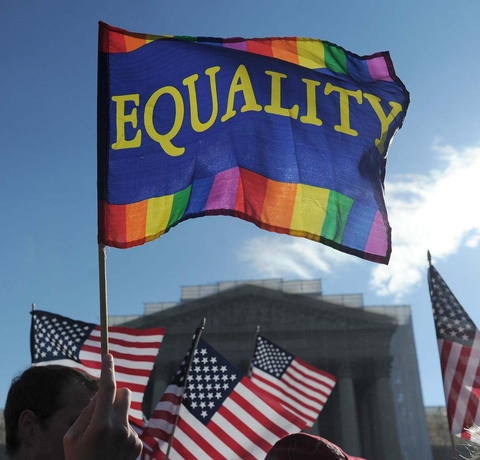 The Supreme Court grappled at times on Tuesday with historic cases that could impact millions of LGBTQ Americans.

At the end of two hours of lively arguments, it seemed clear that the four liberals on the bench believed that federal employment law that bars discrimination based on sex includes claims of sexual orientation and gender identity.

Two separate cases were argued on Tuesday. One concerning whether the law encompasses claims of sexual orientation brought by Gerald Bostock, and the estate of Donald Zarda. The other concerned a transgender woman, Aimee Stephens, marking the first time the court heard arguments regarding the civil rights of a transgender individual.

How the justices rule could have critical implications for the LGBTQ community made up of approximately 1 million workers who identify as transgender and 7.1 million lesbian, gay and bisexual workers, according to UCLA's Williams Institute.

While the four liberals may side with the LGBTQ petitioners, it is unclear if one of the five conservative justices will join them. All eyes were on conservative Justice Neil Gorsuch who often focuses on the plain text of a law when analyzing it.

Gorsuch told a lawyer for the LGBTQ side at one point that it could be a "close" call suggesting he thought they could win on the plain text of the law.

The question surrounds the meaning of "because of sex" in Title VII of the Civil Rights Act of 1964.

Gorsuch also wondered if "at the end of the day" such an opinion with such "massive social upheaval" should be addressed by Congress. There he seemed to agree with the Trump administration and conservative Justice Samuel Alito, who seemed the most skeptical of the LGBTQ position.

Alito repeatedly pressed a lawyer for the LGBTQ petitioners if they were "trying to change" the original intent of Congress when it passed the law 55 years ago. Alito noted that Congress had been asked "repeatedly" to address the issue and had failed to act. He questioned whether the Court should get involved in a matter of policy, better suited for Congress.

Near the end of the lively session, Justice Sonia Sotomayor asked Solicitor General Noel Francisco at "what point" a court should continue to permit discrimination. She noted that LGBT workers are being fired and "beaten" and at times still ostracized.

Francisco, representing the Trump administration, responded it was up to Congress to address the issue.

Justice Brett Kavanaugh did not ask many questions and Justice Clarence Thomas was, as usual, silent. Chief Justice John Roberts kept pushing lawyers on both sides of the reach of a potential opinion and how it might impact other cases coming down the pike concerning issues of religion and the use of public school bathrooms by transgender students.

In 2013 Stephens told her co-workers that she had decided to have sex reassignment surgery and return to work as a transgender woman.

"I have known many of you for some time now," Stephens explained in a letter, and then she told them she had decided to have sex reassignment surgery and reject the sex she'd been assigned at birth.

"The first step I must take is to live and work full-time as a woman," Stephens wrote. "I will return to work as my true self, " she added, "in appropriate business attire."

Not long after, she was fired from her job as the director of a funeral home. She sued.

"We have the same basic human rights that everyone else does," Stephens said during a recent event in Washington hosted by her legal team at the American Civil Liberties Union.

The case comes in the wake of the Supreme Court's decision in 2015 clearing the way for same-sex marriage nationwide. But there is a critical difference. That opinion --- Obergefell v. Hodges -- was decided when Justice Anthony Kennedy, seen as a champion for LGBTQ rights, was still on the bench. He's since been replaced by Kavanaugh, considered to have a more conservative outlook. The court's eventual decision -- on an issue that is a touchstone for each party's base -- will come down in the heat of the presidential election.

Supporters of LGBTQ rights say there is a lot on the line.

"It would be huge for the LGBT community to have protections in the private sector from employment discrimination, which is pretty much a rampant problem to this day," said Paul Smith, a professor at Georgetown University Law Center, who argued and won a landmark gay rights case in 2003.

He notes that federal employment protections have been a goal for decades, and that a win for the LGBTQ community could inspire changes in other areas of the law including claims of housing discrimination.

Split between Trump and Obama administrations

Francisco, arguing for the Trump administration, argued that the law does not bar discrimination based on transgender status or sexual orientation.

Francisco said that the case isn't about whether as a "matter of policy" Title VII should forbid discriminating on the bases of transgender status or sexual orientation. It's about the fact that, from his perspective, the current law doesn't provide those protections. Congress would need to change the law.

The case also highlights a difference between the Trump administration and that of the previous administration. During the Obama administration, the Equal Employment Opportunity Commission, an independent agency responsible for enforcing federal law that makes it illegal to discriminate based on sex, took the position that federal law does encompass protections for gender identity and sexual orientation. That is the position of the agency today, as posted on its website.

Stephens won when the lower court noted that her former boss, Thomas Rost, had testified that Stephens was fired because she "was no longer going to represent himself as a man." (Rost refused to address Stephens with feminine pronouns.)

A panel of judges from the 6th US Circuit Court of Appeals held that it is "analytically impossible to fire an employee based on that employee's status as a transgender person without being motivated, at least in part, by the employee's sex."

David Cole, the National Legal Director for the ACLU believes the lower court got it right. "In discharging Ms. Stephens for being transgender," Cole wrote, the funeral home "contravened Title VII's core premise: that employees should be judged on their merit, not their sex." He also argued that the funeral home violated the law by firing Stephens for "failing to conform to sex-based stereotypes."

While Cole focused on transgender rights, Pamela Karlan of Stanford Law represented Bostock, a gay man from Georgia who had been employed as a child welfare services coordinator and said that he was fired after his bosses learned that he was gay and served on a gay recreational softball league. She is also representing the estate of Donald Zarda, who had been employed as a skydiving instructor and made similar claims. Zarda died in an accident in 2014 but he is now represented by his estate.

In legal briefs, Karlan told the justices that the law's "commitment to providing workers with equal employment opportunities without regard to their sex requires protecting people against discrimination for being lesbian, gay or bisexual."

Judges in dissent and in the majority on the various appeals courts hearing the cases have struggled with the cases and legal experts believe the issue might skew along traditional liberal and conservative lines, if some of the justices look to the plain text of the law.

For advocates on the side of the LGBT community to get five justices on their side, former Solicitor General Paul Clement said at the Georgetown Law event, they might "start with the left side of the court" and then get a conservative "textualist" who could focus on the plain words of the law.

But John Bursch, a lawyer representing the R.G and G.R Harris funeral home owned by Rost and his wife Nancy, said that "Stephens' view drastically expands the meaning of sex discrimination and rewrites Title VII to add protected categories that Congress never included."

He said that if Stephens were to prevail, the ruling would spill over into other federal laws that prohibit sex discrimination.

Although Rost, working with the conservative Alliance Defending Freedom, declined to be interviewed before arguments, in a video on the group's website he said the decision was "very, very difficult for my staff and for us as a family, we just want to serve families well."

A group called C12, which calls itself the largest network of Christian CEO's, and business owners in the United States, says in their own brief that Congress could not have intended to include protections for gender identity and sexual orientation because "the concept of including such traits in an anti-discrimination law was unheard of in 1964."

But 206 businesses—including Apple and Amazon have filed their own brief taking the opposite position and noting that they have over 7 million employees and comprise over $5 trillion in revenue.

"No one," they argue "should be passed over for a job, paid less, fired, or subjected to harassment or any other form of discrimination based on their sexual orientation or gender identity."

And lawyers for more than 20 states point to a 2008 survey from the Human Rights Campaign that 42% of lesbian, gay and bisexual people reported having suffered from at least one form of employment discrimination. Data from the 2011 National Transgender Discrimination Survey found that nearly all of those surveyed -- 90% -- had experienced "harassment or mistreatment" on the job.