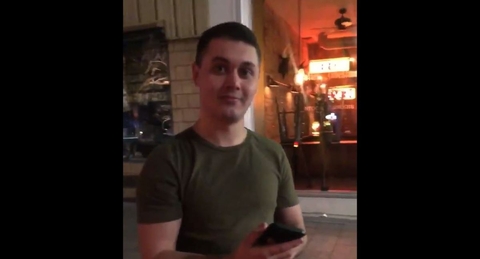 Taken from a screenshot from a twitter video posted by @saltrejo

My friends and I were assaulted by this homophobic man in downtown Salt Lake City last night. Anyone know him? The police are interested in having a chat with him. #SaltLakeCity @slcpd @slcmayor @EqualityUtah pic.twitter.com/1tPFSCADOp

An eight-second video on Twitter shows a man hitting another man in after asking him if he’s gay. According to a CBS article, the victim, Sal Trejo, replied saying he is gay. The suspect responded by asking again, “oh then you’re gay?” Before Trejo was able to answer, the suspect began to hit him.

The video was reported to SLCPD and is being investigated.

Trejo told KUTV the incident happened at 1:45 a.m. Feb. 17 outside a bar on Main Street while Trejo was waiting for an Uber driver. He also said he didn’t know the man in the video.

LGBT news source, “Q Salt Lake,” wrote police are asking for anyone with information on the man to come forward and contact authorities.