How do you spell racist? 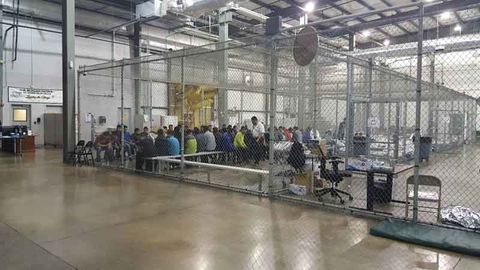 Detention center with cages for migrant children. US Customs and Border Protection photo.

I’ve thought Donald Trump is a racist since his opening salvo in questioning President Barack Obama’s birthplace, religion, admission to college and more. So it wasn’t a surprise to me when the opening speech of his presidential campaign called Mexicans rapists and criminals.

Since then – as president – he has added “vermin” and “animals.” His zero-tolerance immigration policy, which resulted in separating children from their parents, is undoubtedly his most egregious racist action yet.

It is clear, as of this writing, that Trump’s administration has no intention of reuniting many of the children with their parents. Many of them will end up in long-term foster care. From the start, because they did not plan to reunite the families, they kept few records which would allow reunification to happen.

His insults to Mexicans and people from Central America are not enough to satiate his racist appetite. He has also disparaged Muslims, Africans, African-Americans and Jews. He is pretty much an “equal-opportunity” hater.

Through it all, he insists he isn’t a racist or an anti-Semite. According to the Washington Post Trump has claimed to be the least racist person…ever! My favorite quote came after he called Haiti and some countries in Africa, all predominantly black, “shithole countries.”

He said, “Number one, I am the least anti-Semitic person you’ve ever seen in your entire life. Number two, racism, the least racist person.”

Trump didn’t just become a racist when he decided to run for president. It wasn’t just an act put on by a TV celebrity to appeal to a specific base that he needed to fuel his campaign. Trump has been a racist his entire life.

In 1973 Trump and his father, Fred, were accused of discriminating against minority tenants at one of their housing developments. Of course, they claimed they were innocent, but in 1975 they settled with the government by agreeing to meet certain standards. They admitted no violations. In ’78, DOJ accused them of continuing to discriminate, despite the settlement.

In 1989, five young black men were arrested after being accused of a brutal attack on a jogger in Central Park. Trump ran full-page ads against the group, called the Central Park Five, stressing law and order and calling for a return to the death penalty. Thirteen years later, the men were exonerated. As late as 2016 he continued to dispute the group’s innocence.

In 2000, Trump secretly funded anti-Native American ads targeting a Native American gambling proposal. He used vile epithets and stereotypes in his ads. He agreed to apologize and pay a fine. But he’s not done with Native Americans. During the campaign and since, he calls Sen. Elizabeth Warren “Pocahontas” because she claims Native American ancestry.

He continues to ignore the plight of Puerto Ricans after a massive hurricane destroyed their island. In my opinion, it’s because these American Citizens are people of color and speak Spanish.

As I write, his administration is quietly discharging immigrant non-citizen military members who enlisted under a program that provided a rapid route to citizenship.

All of these are evidence of President Trump’s long-enduring racism. If you want to know how to spell racist, it’s easy: T-R-U-M-P.

The editors and staff of The Gayly do not necessarily agree with the opinions expressed in this column.