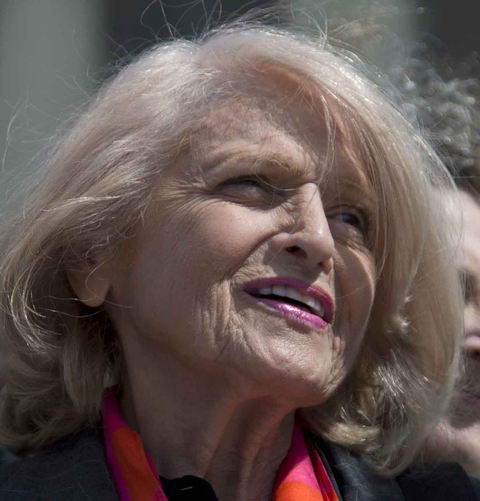 “It is one of the great sadnesses of my life that we never met Edie, and told her how much we appreciate her,” says Sharon Bishop-Baldwin. She and her then partner, now wife, Mary Bishop-Baldwin, were the named plaintiffs in Oklahoma’s winning marriage equality lawsuit. They are LGBT+ icons in their own right.

Edith “Edie” Windsor’s rise to icon status was long. She met Thea Spyer in 1963. Two years later, they fell in love. In 1967 Spyer asked Windsor to marry her. It was the start of a life journey that ultimately ended with same-sex marriage being made legal in 2015.

The couple lived quietly in New York City. But when the Stonewall riots happened, they were moved to activism, openly joining LGBT+ marches and other events.

In the 70’s, Spyer was diagnosed with multiple sclerosis, a progressive, debilitating disease that gradually leads to increasing paralysis. Spyer’s health continued to decline and Windsor retired early to become her full-time care giver.

“The great thing that I learned about Edie,” asserts Bishop-Baldwin, “was that she had fought for LGBT rights for years, before anyone knew who she was.” Upon retirement, Windsor began volunteering for a number of New York City LGBT+ organizations.

In 1996 Congress passed the so-called Defense of Marriage Act (DOMA), banning the federal government from recognizing same-sex unions or giving them any of the long list of federal benefits accorded married couples. That event set-up Windsor’s place in LGBT+ history.

Doctors told Spyer in 2007 that she had less than a year to live. The couple traveled to Toronto where they married. Spyer died in 2009. Windsor was hit by a $363,000 estate tax bill from the federal government. Because of DOMA, same-sex couples did not receive an exemption given to opposite-sex couples, who would have paid no inheritance tax.

Windsor sued the government in 2010. Bishop-Baldwin says, “We filed our lawsuit in 2004; there were many of the same arguments as in the Windsor case. But there was no precedent for what we wanted to do.”

On June 26, 2013, in the Supreme Court decision that bears her name, Edie Windsor won, effectively overturning DOMA. The Windsor decision secured her place in LGBT+ history. LGBT+ couples across the nation won access to federal benefits for the first time.

“Many cases were filed in the wake of the Windsor case,” observes Bishop-Baldwin. “Obergefell is of course, the case that won marriage equality but that never would have happened if Windsor hadn’t broken the logjam.”

On June 26, 2015 the Supreme Court’s Obergefell decision extended marriage equality across the country.

Windsor serves as a shining example for Sharon and Mary Bishop-Baldwin. “After the Supreme Court decision she went right back to what she was doing,” notes Bishop-Baldwin of Windsor. They, too, have continued working for full equality for LGBT+ people after their winning case.

Edie Windsor died this September, at age 88. The entire LGBT+ community owes her an enormous debt of gratitude.