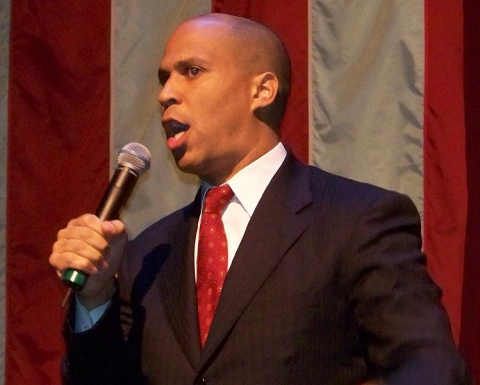 NEWARK, N.J. (AP) — Newark Mayor Cory Booker, an outspoken advocate for gay rights, penned a column in college about overcoming the "disgust and latent hostility" he once felt toward gay people.

In a piece titled "Pointing the finger at gays," Booker, then a student at Stanford University, wrote that he had "hated gays" though he was able to feign acceptance until a meeting with a gay peer counselor opened his eyes to the struggle for acceptance shared by gays and his black grandparents.

"While hate is a four-letter word I never would have admitted to, the sentiment clandestinely pervaded my every interaction with homosexuals," Booker wrote in the April, 8, 1992 edition of the Stanford Daily.

Booker, now a prominent Democrat considering a run for U.S. Senate in 2014, was a columnist for paper, which reprinted the piece Wednesday as part of a recurring series of archived opinion pieces.

"I still remember how my brow would often unconsciously furrow when I was with gays as thoughts would flash in my mind, 'What sinners I am amongst' or "How unnatural these people are.'" Booker wrote.

Those views changed after Booker met a gay counselor at The Bridge, Stanford's peer counseling group, during his freshman year.

Booker said he wanted to "argue and debate" with the counselor, Daniel Bao, during their first conversation about homosexuality. Instead, Bao "quickly disarmed me with his personal testimony."

Bao, Booker wrote, told him about years of "denial and the pain of always feeling different." Bao recounted stories of violence against gays, some of whom "religiously prayed to God to help them become straight."

The conversation reminded Booker of his family.

"It was chilling to find that so much of the testimony he shared with me was almost identical to stories my grandparents told me about growing up Black," Booker wrote.

The experience clearly had a deep effect on Booker, now a vocal supporter of gay rights who correlates the fight for civil rights to gay rights in speeches and public comments. Under his leadership last year, the Democratic Party's platform committee for the first time included support for same-sex marriage.

He was a featured speaker at the Human Rights Campaign's 2012 National Dinner, where he was introduced as a "tireless advocate for LGBT equality" and gave an impassioned speech.

Booker's office did not respond to a request for comment. In response to a tweet Thursday, Booker wrote he was "writing about my teenage struggle for integrity."

He also tweeted a link to video of a 2012 press conference where he was asked about a potential referendum on same-sex marriage in New Jersey, using the hashtag (hash)EqualityForAll. The state legislature passed a same-sex marriage bill. Gov. Chris Christie vetoed it, saying voters should decide the issue. It did not appear on the 2012 ballot.

"We should not be putting civil rights to a popular vote," he said at the time.

Booker has said he believes that same-sex marriage will become law in New Jersey.

"And when that bill is signed," he said during his Human Rights Campaign speech, "I may have a very good seat for it."