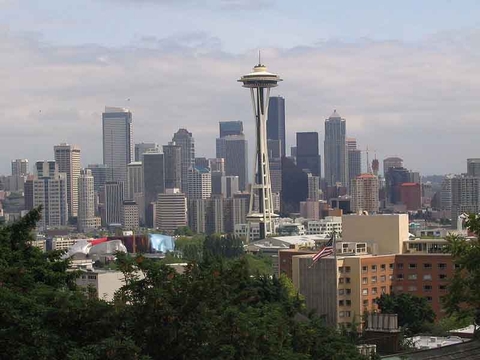 Some experts consider Seattle's approach to dealing with hate crimes a model for other cities. File photo.

Seattle (AP) — In a classroom spotted with colorful hijabs, Seattle police Detective Beth Wareing stands in front of whiteboard and asks the group of 25 refugees what the police were like in the countries they emigrated from.

"From what I've heard, police are not the people you call for help," she says.

As case managers translate, bits of chatter erupt in Somali, or Ethiopia's Amharic and Eritrea's Tigrinya.

Karin Kaups, a teacher at the Refugee Women's Alliance, asks the adult students for one word to describe police.

"Scary," says one student, in English. Some are good, some are bad, another man explains.

The police are on your side here, Wareing tells the class. She explains how to call 911, what to tell dispatchers and how they should expect police to treat them ("professionally"). It's a prelude to her message as Seattle Police Department's bias-crime coordinator. She wants to talk to them about hate.

"If you're targeted by someone who hates I want you to call 911 and report it," she says.

If you feel threatened, even if you're unsure it's a crime, report it, Wareing says. "If you make a report I keep statistics. I write down all the cases. I give it to the police chief."

Later, with her eyes welling up, Wareing will tell the new refugees, "I'm happy you're here in the United States, and welcome — the Seattle Police Department is here to help."

It's a heartfelt but pointed message. Reports of hate crimes are rising nationwide. Some worry national political rhetoric and anti-immigrant sentiment could add fuel. Seattle, with its broad-ranging hate-crime laws and specialized police and prosecutors, is well-positioned to be a bulwark against hate.

Some consider it the model.

"I wish every major metropolitan area was like Seattle in terms of coverage of their statutes, the structure in which they prosecute hate crimes. It tends to be, with some bumps in the road, a progressive community that takes these crimes seriously," said Brian Levin, a professor of criminal justice at California State University San Bernardino who studies hate crime.

"Seattle reports more hate crimes than the state of Florida. What that tells you is Seattle is doing a good job," he said.

In fact, Seattle reported more hate crimes than 33 states in the U.S. (including Florida), according to 2015 FBI statistics.

State law defines malicious harassment — a felony commonly referred to as a "hate crime" — as intentionally injuring, damaging property or threatening someone "because of his or her perception of the victim's race, color, religion, ancestry, national origin, gender, sexual orientation, or mental, physical or sensory handicap."

Reports of the three categories combined have risen in Seattle from 113 in 2012 to 255 last year, according to SPD figures. Perhaps counterintuitively, Wareing would like to see that trend continue.

In the short term, "Success for me, to some degree, means our numbers go up a little bit, which means we have more reporting," Wareing said. "The more I go out into the community, the more I hear stories."

The recent stories of Seattle bias incidents range from bomb threats to anti-Semitic vandalism to encounters with ranting, hateful strangers near a Metro bus stop.

Deputy King County Prosecutor Mike Hogan, who typically handles about 30-40 hate-crime cases each year, said about half of those involve mentally ill suspects. The other half are drunken bullies, he said.

Said Levin, the California professor, "Most people who commit hate crimes are not hard-core bigots" who plan to carry out a violent mission. "What all these offenders have in common is they're reliant on stereotypes that define certain groups as targets for derision and aggression."

Any expression of bigotry — regardless of violent intent — can reverberate in communities.

In June last year, Bobby Farris, 37, posted threats on Facbeook against Muslims, including "the final crusade against Islam," as well as a photo of North Seattle's Idris Mosque with a comment about "too many targets to count," according to charging documents. Farris was arrested after a brief standoff.

"We had at least a 50 percent drop in attendance," said Hisham Farajallah, a spokesman for the mosque.

Last month, Farris pleaded guilty to attempted malicious harassment. In pleading documents, Farris admitted he "was highly intoxicated and depressed" when he posted his threats, but said he did not have weapons or intend to harm anyone.

A felony charge was reduced to a gross misdemeanor so Farris could participate in Mental Health Court, a therapeutic court open to defendants with qualifying mental-health conditions. The program allows defendants to avoid jail time but meet frequently with the court and connect them with support resources, like housing and counseling.

Farris, who has a history of alcohol, marijuana and cocaine use according to a treatment plan, must comply with strict program requirements.

The mosque approved of the rehabilitation attempt.

Attendance is back to normal at the mosque, Farajallah said. Cards and flowers with messages of support from the community grace its walls inside.

In Seattle, officers are trained to listen for indications a crime might be motivated by bias, Wareing said.

Any case flagged as a possible bias incident ends up on Wareing's desk for review. Some aren't crimes. Speech, even nasty, is free.

Crimes are then assessed for their "solvability," Wareing said.

Groups targeted for harassment have been those "historically estranged from law enforcement," Hogan said. "Community outreach has been the avenue for whatever success we've had."

Wareing joined the Lynnwood Police Department after college in 1997 during a "tough-on-crime phase" for policing, as she described it, and at a time with few women in the office and at least one male "old-timer" who wouldn't go on a call with Wareing because of her gender. At 26, she became a detective who investigated everything, including homicides.

Her strength is as a listener and communicator, she said. In 2009, she earned a master's degree in counseling ("the best training I ever got to be a police officer") and worked part-time as a mental-health counselor on weekends before coming to SPD. She continues to staff a hotline for first responders in crisis.

"We all have stereotyped views of what police officers are. Then you meet her. Empathetic, smart, who just gets people," said Bruce Miyake, assistant U.S. attorney for civil rights.

Miyake and Hogan are seasoned prosecutors.

Hogan, who has been with the county for 33 years, has handled malicious-harassment crimes since the 1980s, a decade in which he was "harassed for being gay on Capitol Hill on a couple occasions," he said. Hogan was part of an effort then to add lesbians and gays to groups protected by the state's hate-crime statute.

He primarily prosecutes threats, he said, and most people plead guilty.

Meanwhile, Miyake and the federal government proactively look for hate-crime cases in which it has jurisdiction. In some cases, federal prosecution could result in longer supervision for offenders.

Fear of federal prosecution can be a tool for Hogan in plea negotiations.

"A lot of people don't want the stigma of being prosecuted for a federal hate crime," Miyake said. "There's no federal prison in Washington. They could end up anywhere in the United States."

It's not clear what role national politics plays in rising hate crime.

In recent months, only a few cases have involved political speech, Wareing said, and "it's not the onslaught people expected."

Recent vandalism at the Temple de Hirsch Sinai was "more sophisticated — it was much more political."

"My concern is that there is permission for some people to speak out in a bigoted way," he said. "When you have leaders spewing bigotry it's sometimes the followers who aren't all there" who feel emboldened, he said.

High-profile convictions can spur reporting, Hogan said. He hopes to see gains in reporting from Latino and immigrant communities after negotiating a guilty plea in the case of Sandra Jametski, who railed against "Spanish privilege," questioned a woman's immigration status and threatened to ram her car — all in a Facebook Live video.

Fear of deportation should not be a barrier, he said, adding that it's possible to get visas for crime victims.

Federal hate-crime cases must be approved for prosecution in Washington, D.C. With a new administration, Miyake said he wonders "whether communities will continue to trust us (federal law enforcement)) given the aggressive immigration policies of the federal government," he said, and also "whether or not the federal government will invest the resources to aggressively prosecute these cases."

"It doesn't matter what they say at the federal level. Our commitment is not going to change," he said. "If it means I have to do this on nights and weekends, that's what I'll do."

Information from: The Seattle Times, http://www.seattletimes.com