How will you vote on State Question 788? 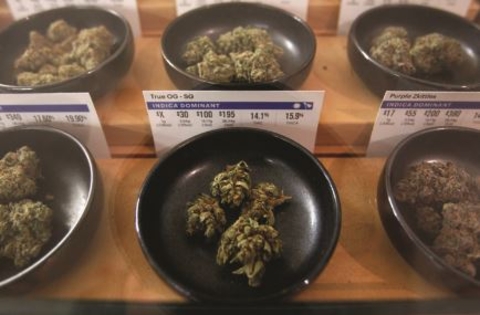 Marijuana on display at a dispensary in California. AP, Mathew Sumner.

June is the month Oklahoma can join the 30 enlightened states, including neighboring Arkansas, which have legalized medical marijuana.

Missouri may also join the group later this year; in early May, the state House overwhelmingly passed a bill legalizing legalization for medical purposes and sent it to the state Senate.

The Oklahoma election on State Question 788 will be June 26. Legalization is on the ballot because Oklahomans for Health and several groups circulated a referendum petition in 2016.

The Oklahoma law will be among the most liberal in the nation. While many states outlined a limited number of conditions which would qualify for legal purchase, Oklahoma’s provides no restrictions on the patient’s medical condition.

It will be totally up to the patient and their doctor to determine whether cannabis will help their condition and to get a prescription.

Support nationally for medical pot has soared in recent years. A 2017 Quinnipiac University poll found 94 percent of respondents want it to be legal, only five percent opposed it.

Marijuana remains an illegal drug on the federal level. Showing astounding stupidity, Congress has classified pot as a Schedule 1 drug, saying it is as dangerous as heroin or LSD.

Under President Obama, the federal government left states which legalized pot for medical or recreational use alone. Trump’s Attorney General Jeff Sessions has reversed that practice and pledged a campaign against the use of marijuana for any purpose.

Despite that, there has been a swing in support in medicine and politics. As an example, in 2017, Dr. Sanjay Gupta, who is both a celebrated brain surgeon and CNN’s Chief Medical Correspondent, reversed his previous stand against medical marijuana.

In a blockbuster hour-long special, he explained his new support for the drug and gave compelling vignettes supporting the use of the drug.

Perhaps the most moving was the case of a toddler who was having 300 seizures a week. Medical marijuana reduced her seizures to two or three per month.

Dr. Gupta also criticized Congress for the drug’s classification. He said in the special he had earlier believed lawmakers “must have quality reasoning as to why marijuana is in the category of the most dangerous drugs which have ‘no accepted medicinal use and a high potential for abuse.’

“They didn’t have the science to support that claim, and I now know when it comes to marijuana neither of those things are true,” he continued.

“It doesn’t have a high potential for abuse, and there are very legitimate medical applications. In fact, sometimes marijuana is the only thing that works.”

Opponents continue to believe marijuana is dangerous but cannot point to any deaths from its use. Contrast that with deaths from opioid-drug overdoses. The federal department of Health and Human Services reports that number stands at a shocking 116 people a day. That’s over 40,000 deaths a year.

The National Institute of Health estimates there are 88,000 deaths a year from alcohol-related causes.

Tobacco, a legal substance, claims more than 480,000 people a year. And marijuana, with no known deaths, remains on the most dangerous drug list.

I urge you to vote yes on Oklahoma State Question 788 on June 26. It’s time Oklahoma joined the 21st century!

The Gayly and staff do not necessarily agree with the opinions expressed by this columnist.