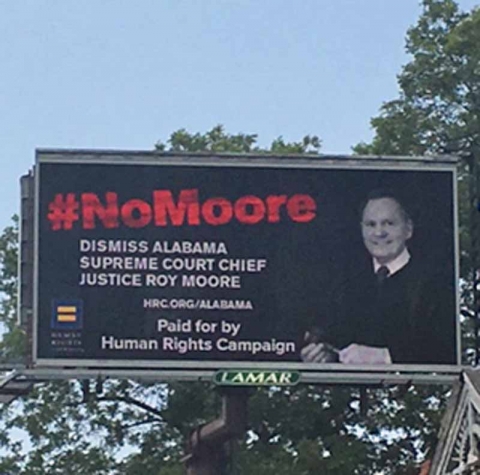 HRC wrote in its blog, “HRC Alabama revealed a new billboard off I-85 in Montgomery calling out disgraced, notoriously anti-LGBTQ Alabama Supreme Court Chief Justice Roy Moore. The billboard, which reads “#NoMoore: Dismiss Alabama Supreme Court Chief Justice Roy Moore” goes up as Moore, suspended from the bench in May for his consistent defiance of pro-marriage equality federal rulings in the state, is set to be questioned by judicial prosecutors during a hearing Monday on ethics charges.”

AL.com reported Moore’s attorney’s quick objection to the billboard, saying, “Mat Staver, Founder and Chairman of Liberty Counsel, which represents Moore, said that HRC is a group outside Alabama that is trying to gain media attention to itself. ‘I don't think they have a lot of supporters for the HRC in Alabama ... That is not the sentiment of the general population,’ he said.”

Staver of course neglected to mention that Liberty Counsel is a group outside Alabama that is trying to gain media attention to itself. The anti-LGBT group is located in Orlando; Staver is its Founder and Chairman. The organization defended Kentucky clerk Kim Davis when she refused to issue marriage licenses to same-sex couples after the Supreme Court’s Obergefell decision.

AL.com reported that Eva Kendrick, state manager of HRC Alabama, stated in the press release. "Roy Moore took an oath to uphold the laws of the United States and Alabama, yet he has flagrantly defied every federally binding pro-marriage equality ruling. This billboard serves as a reminder that Roy Moore is unfit to serve the people of Alabama on our highest court, and should be removed and censured for his obstructionist tactics.

“According to a Facebook post, HRC also is urging people to attend a rally on the steps of the Alabama Supreme Court on Monday outside where the hearing will take place.

“Moore supporters, however, are being encouraged by friends of Moore to also be there too, beginning at noon. ‘Please tell your friends, your family and your church about what is happening to Judge Moore and about the trial and rally,’ according to the email.”

HRC was among the civil rights groups joining the Southern Poverty Law Center in filing the ethics complaints that led to Monday’s ethics court hearing.